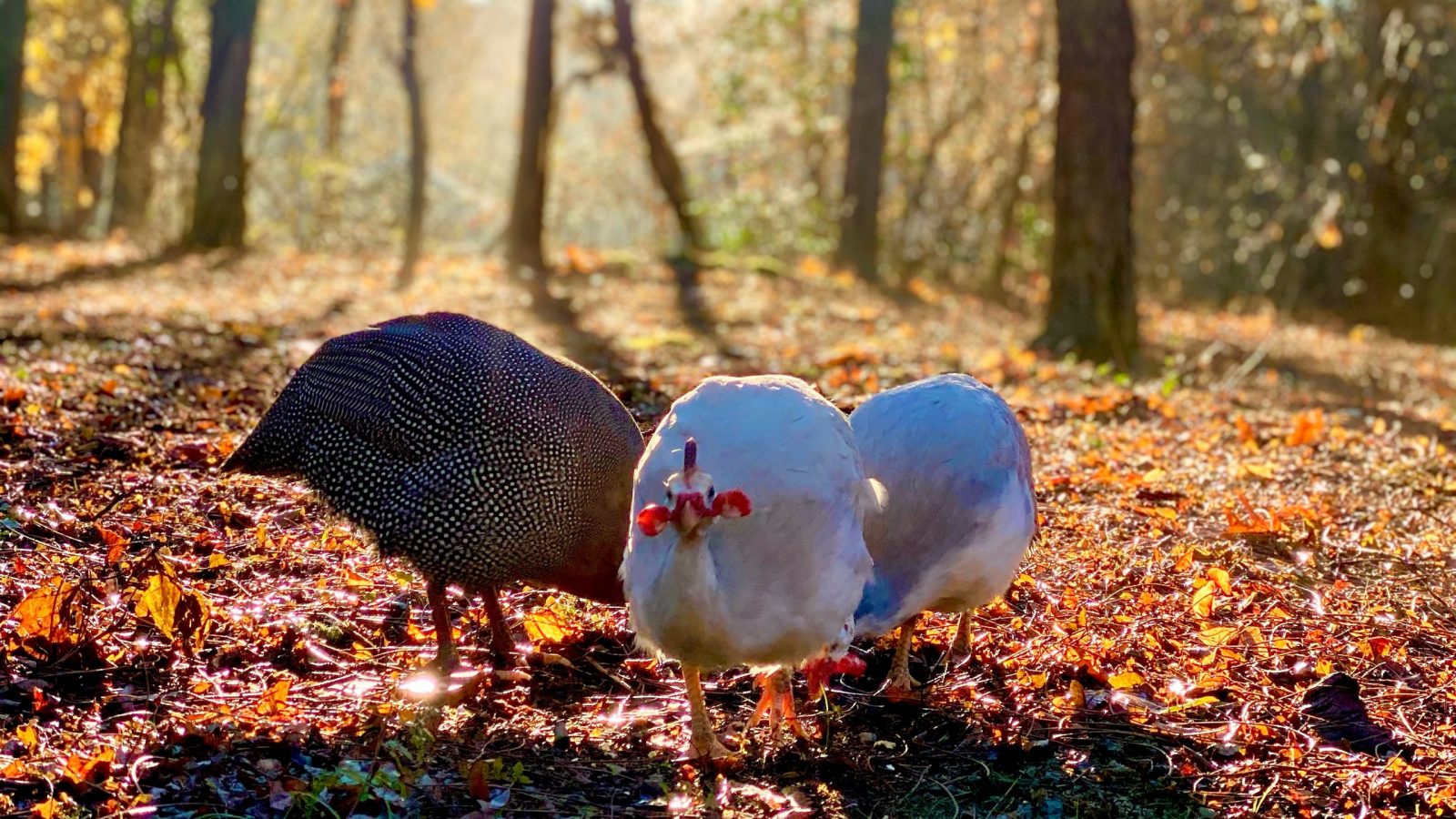 I have a story to share about a Guinea hen, I call Chick Chick. I’m not quite sure if it is a happy ending or not. Maybe it’s bittersweet. It’s hard to know if animals are happy but sometimes, I guess the best we can do is take clues. I’m not sure if she wanted to be a chicken, but right now “becoming a chicken”seems to be the best option and maybe one that makes he or she happy.

As many of you know, last fall three rogue, wild guinea hens appeared in our yard and garden. They were bedraggled and in need of care. Skittish at first, they slowly warmed up to me and my husband. We provided our small coop for shelter during the snowy New England winter. I wasn’t sure if these African birds would survive, but somehow after roosting in the tree above the chicken coop, they did. They all survived until spring. My neighbor even named them Winken, Blinken and Nod.

In late March, one morning I went out to feed and tend the chickens and I noticed that one Guinea was missing. I was hoping that perhaps she had laid a clutch of eggs in the woods. Perhaps she was merely hatching them during the spring time, as this is what Guineas do. I reasarched “how long it takes to incubate Guinea eggs”.  The expectancy date came and passed. She never returned.

The two remaining Guineas seem to have a real bond. Not really knowing quite how to determine males from females, I assumed they were a mated pair. They spent their days shuffling and running and skitting about the yard. Sometimes I would find them on the roof of my house!  But at the end of the day, they religiously returned to roost in the cedar tree above the chicken coop. No matter how I tried, I could not convince them to use the smaller coop I had set up for them.

Then one spring day during my morning routine, I called out to the Guineas and only one girl came. My heart sank. Perhaps the other was taken and sure enough, I noticed feathers strewn across the woodland behind the house. I explored deeper into the woods and found his lifeless body. He was mauled.

We had a burial and our one remaining Guinea hen went into mourning. Oh how she cried. She wailed and hollared as if begging for him to return to her. Nothing. No one came. Each night she returned to their tree to roost. She cried for weeks. I was at a loss. She was unconsolable.

As the days passed and spring warmed the earth, the leaves and buds swelled and the grass became a lush green. The perennials awoke from their slumber and I  developed a routine with our one sole survivor “Chick Chick”. Some days I would find her peering into my front door on the steps. Other times, she would come down to the car and greet me upon returning from my errands. Each day she enjoyed exploring her surroundings. Slowly, her wandering perimeter grew. I knew this was so because she still came when I called her. I could hear her call out to me from a distance. Her return time to me would vary sometimes taking up to 10 minutes.  But she always returned.

Then one day, when I returned from work early evening, I called to her and I didn’t hear her. I kept searching her favorite spots, calling out as my heart began to sink. She didn’t return that evening. It had been two days I had made peace with the fact that she was gone. Then on the third day, a miracle happened. Chick Chick was there, outside the chicken’s chicken coop. Somehow, she had returned. I squealed with delight! I’m not sure if she got lost while wandering or was chased and became disoriented by a predator. I was just glad she was home.

It’s been a few months, and it is rare that I find Chick Chick farther than her tiny coop, the big chicken coop and my garden. After that, it is as if she has settled into staying nearby, spending some of her days now napping outside with the chickens in the run even making a little spot for a dust bath nearby. She seems to be indulging in all things chicken. When the girls lay an egg, she now joins in on singing their egg song.  I’m not sure if this is just part of the cacophony or actually the Guinea hen egg song, there has to be one right? She alerts the girls to danger (link to video) and even spends some time free-ranging with them when they are out and about.

We’ve gotten into quite a routine Chick Chick and I. As expected, she greets me every morning- sometimes in the garden, near her coop or even at the door when I am late. We spend time in the garden together and in the afternoon as I write or work, she perches herself adjacent to me on the deck for an afternoon nap. When I arrive home from work, she greets me near the driveway.

She is also extremely protective of me and does not like it when strangers to her enter the yard. I find her alerting me to their presence- sometimes “screaming” at them from the second story of my own home. She is still skittish so I have yet to hold or touch her, but I know that she and I have bonded. I check on her each night as I do the chickens before they go to bed. She still roosts high up in the cedar tree above the chicken coop.

The routine has been nice and as I always say, some friendships are unexpected. Life is funny that way. If we open our hearts to the world around us with out any expectations or preconceived notions, its really quite a beautiful thing. Even if my neighbor says she looks like an animal put together with spare parts by God, I do love her with all my heart. And you know what, I think the chickens have gotten used to her too. Chick Chick is an honorary member of our flock.