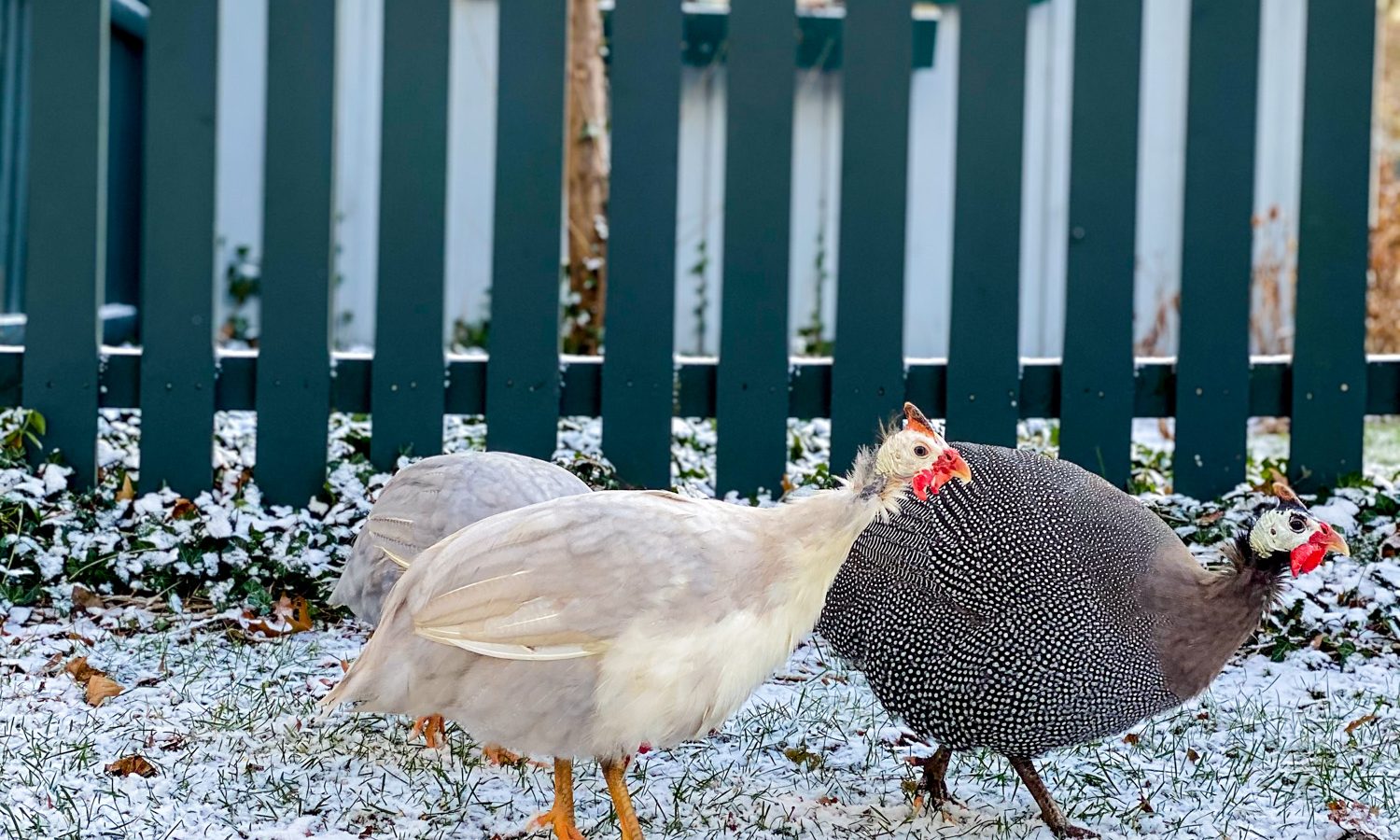 A couple of months ago, I was outside in my garden cleaning up fall leaves. When I’m outside I like to listen to the wild birds and watch them flit to and fro on the bird feeders. Suddenly, I had heard a call coming from the other side of the yard. I didn’t quite know what to make of it. It was loud, cantankerous and a bit panicked. Certainly I was astonished to discover three guinea hens standing there.

After years of keeping chickens, I had read about guinea hens and even visited with them in person at the Mother Earth News Fairs, but I never gave keeping them a thought. I know that they do not like to be confined to coops, they are more wild and certainly noisy. But here they were, in my yard and they appeared a bit bedraggled.

I made my way to the shed and scooped up some chicken scratch and tossed it on the ground. They quickly forgot all fears and ran to the area where I had tossed the mix of grains and scratch. The guinea hens were hungry. I wasn’t sure if they were just passing through or not, but I figured time would tell.

The next morning, they were waiting for me at the garden gate. Standing there, looking at me with those big black eyes waiting for food. Then over the course of a week, it became clear to me that if I continued to feed them they would stay. They spent the day wandering our yard and woods. They even enjoyed standing on my front steps and peeking inside the house, as if looking for me.

The following week, snow was coming and I knew that the guinea hens, although wild, might appreciate a place of shelter. So, I decided to take my old original chicken coop stored behind the garden shed and turn it into a shelter. Now, it is a place for them to come and go as they please with water, food and protection from the wind and elements. Surprisingly, they were quick to investigate.

As the weeks passed, I was wondering what I would say to the neighbors. Most importantly the guineas are not my pets nor do I intend to keep them. On the contrary, they are free spirits that have simply decided to sleep in the trees above the chicken coop. The routine is pretty much the same when I feed the chickens, I open up their little coop, add food and let them be.  They do not sleep in the little coop, but spend hours in it when the weather is bad.  I haven’t named the guinea hens because they are not my pets- simply known as the Apple Dumpling Gang they come and go as they please. Sometimes I do not know where they are, but they seem to come “home” to roost each night and when I call to them. 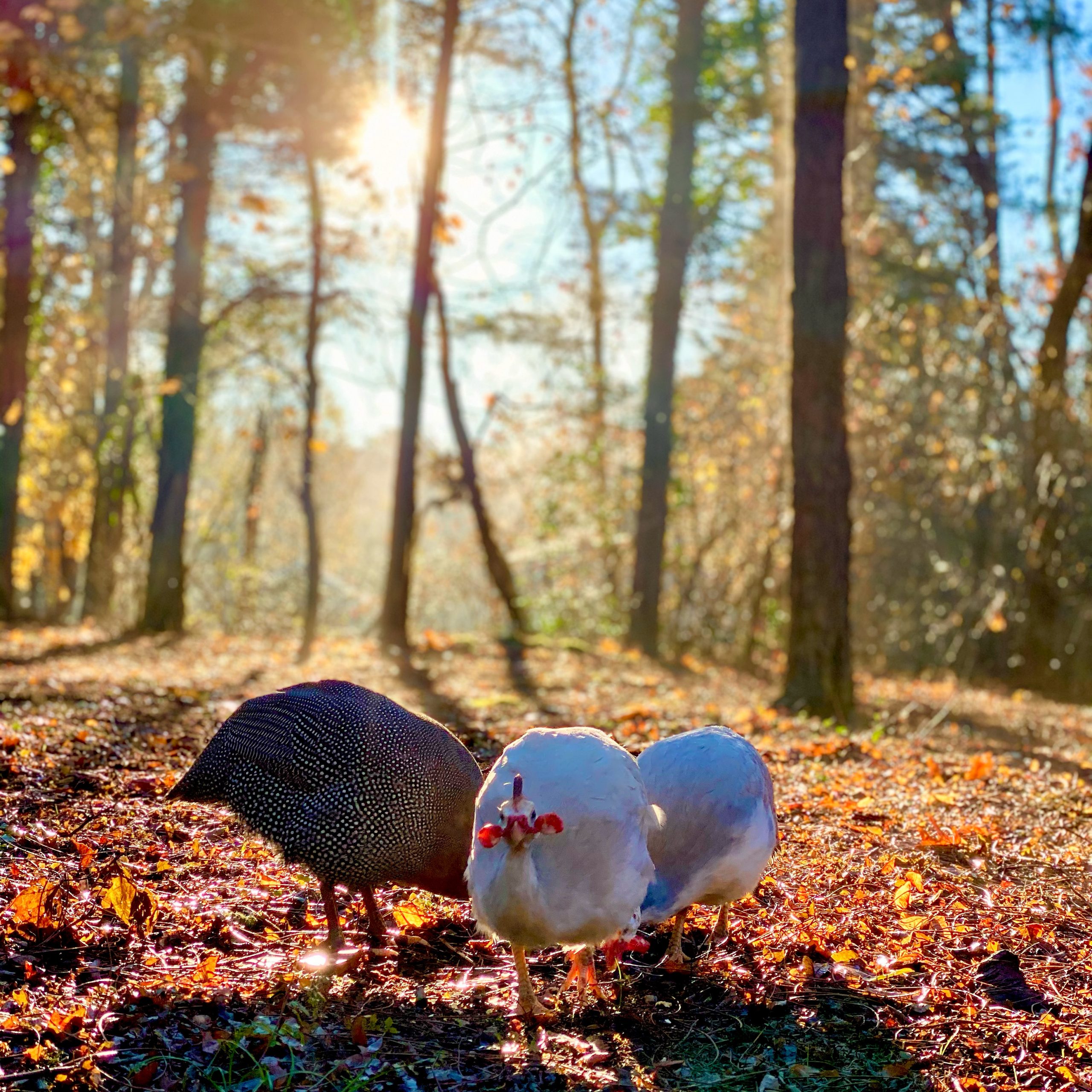 A couple days before Christmas, unexpectedly one of our neighbors came over to ask me if I had guinea hens because they were out loose in the yard. I was so worried about what she would think. Then I caught her up on the entire story. Thankfully she then told me that she “loved them”. Then she has asked if I had named them. I told her no. Apparently they have enjoyed hanging out by her bird feeders in the back and that they now come to her too when she calls for them. Subsequently, I felt a sense of relief.

A few days ago I got an email. Finally the guinea hens had been named- Wynken, Blynken and Nod. It was official and somehow, across the span of our two yards we had both come to find a place for these little Christmas gifts in our hearts. 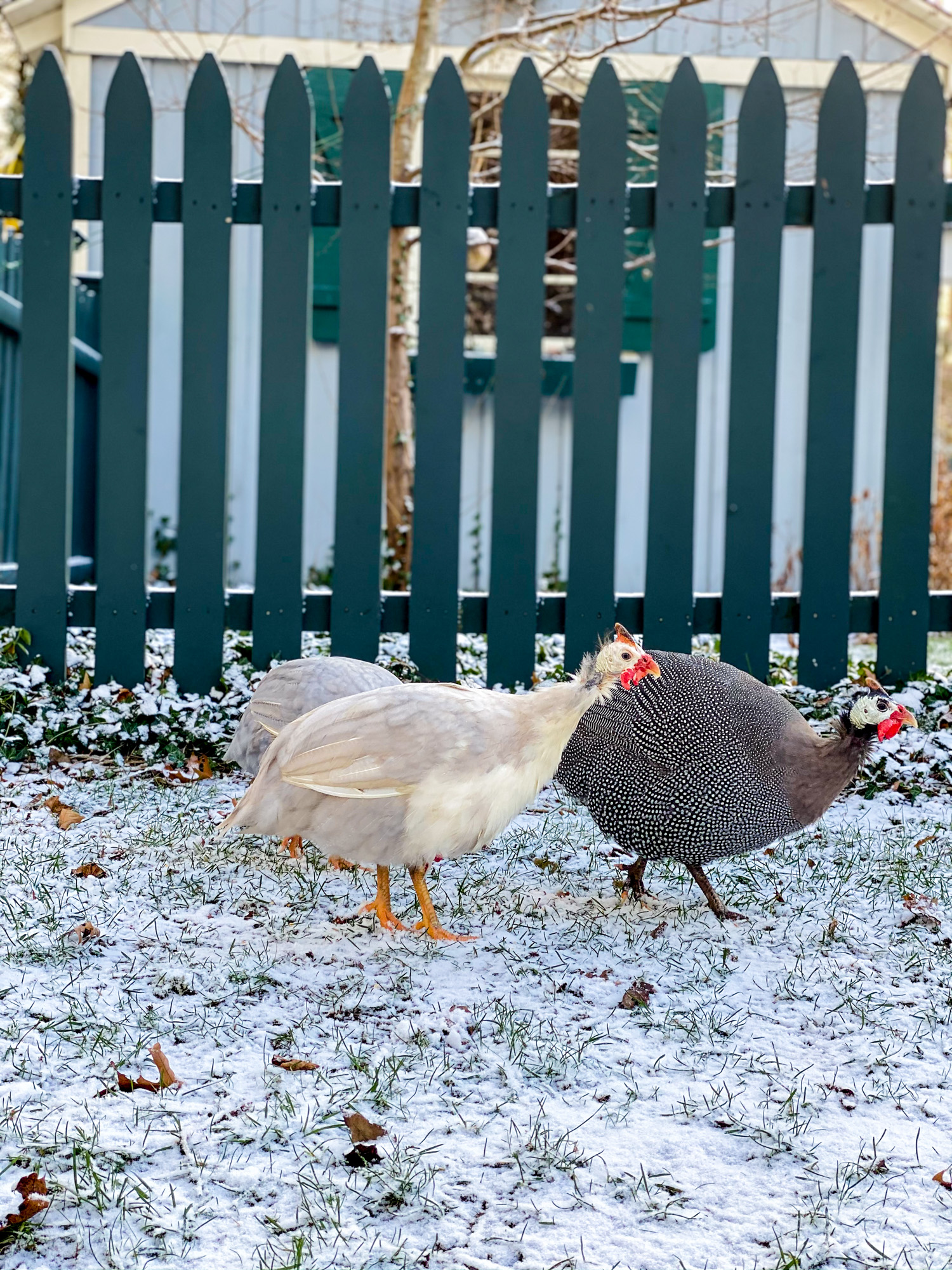 Wynken, Blynken, and Nod one night
Sailed off in a wooden shoe,—
Sailed on a river of crystal light
Into a sea of dew.

“Where are you going, and what do you wish?”
The old moon asked the three.

“We have come to fish for the herring-fish
That live in this beautiful sea;
Nets of silver and gold have we,”
Said Wynken,
Blynken,
And Nod.

The old moon laughed and sang a song,
As they rocked in the wooden shoe;
And the wind that sped them all night long
Ruffled the waves of dew;
The little stars were the herring-fish
That lived in the beautiful sea.
“Now cast your nets wherever you wish,—
Never afraid are we!”
So cried the stars to the fishermen three,
Wynken,
Blynken,
And Nod.

All night long their nets they threw
To the stars in the twinkling foam,—
Then down from the skies came the wooden shoe,
Bringing the fishermen home:
‘Twas all so pretty a sail, it seemed
As if it could not be;
And some folk thought ’twas a dream they’d dreamed
Of sailing that beautiful sea;
But I shall name you the fishermen three:
Wynken,
Blynken,
And Nod.

Wynken and Blynken are two little eyes,
And Nod is a little head,
And the wooden shoe that sailed the skies
Is a wee one’s trundle-bed;
So shut your eyes while Mother sings
Of wonderful sights that be,
And you shall see the beautiful things
As you rock in the misty sea
Where the old shoe rocked the fishermen three:—
Wynken,
Blynken,
And Nod.