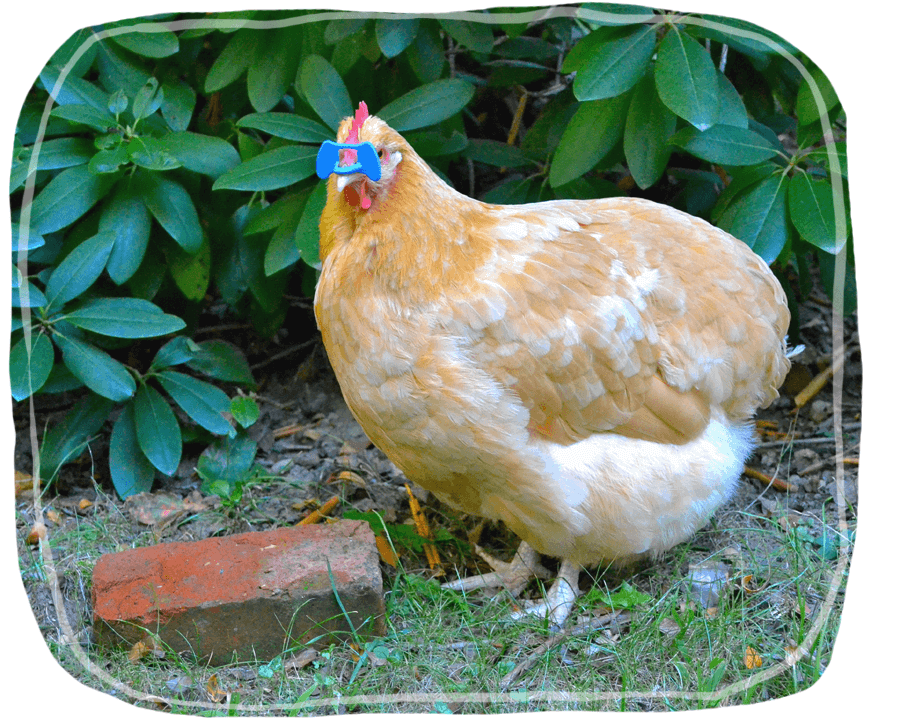 A few days ago, a chicken with pinless peepers popped up in my newsfeed. Pinless peepers are these chicken-like glasses that block them from seeing directly what is in front of them. Chickens with these pinless peepers can still see to eat and drink. For the most part, they have had blinders put on them because of bad behavior. Some chicken keepers put these on those troublemaker hens. Usually it is as last ditch effort to prevent them from bullying or pecking at other flock members. Sometimes they work and sometimes they don’t. After watching these chickens with pinless peepers, you realize that sometimes life becomes a whole lot more interesting when you live with blinders on.

Immediately, the chicken drama usually stops. Living “blindly” with peepers allows you only to see what truly matters. For the chickens it is food and water and the ability to get around. Chickens continues to do all things chicken- roost at night, dust bathe and even free range all drama free. Interestingly, the other flock members are still skittish around them even with the peepers on. They are afraid of being hurt again. I can’t blame them. Even when successful, chickens that had to wear the peepers are still kept at arm’s distance by the other chickens.

Chicken keepers usually leave these blinders on for a few months until one day they remove them and do a test. The goal is that the naughty chicken’s brain resets. Somehow, in this blinded time out they are able to see the world differently and will come back forgetting their old ways.

Sometimes, I feel like I too could use a blinder.

I admit that I am technologically exhausted. Every day my newsfeeds are flooding with so much information, mostly good but some things that are very upsetting and stick in my mind. I swear they haunt me. I have always been sensitive to others and I do know that I wear my heart on my sleeve but is it good that I am seeing all of this? I will never be desensitized to the world around me. I do think it is important to be aware of the world and what is occurring but I don’t think it is good to be bombarded with such horrific acts against the planet and its inhabitants on an hourly basis.

So, while traveling these past 2 weeks, I guess you could say that I was not as in touch. I had put a sort of “blinders” on if you will. I flew miles in airplanes, spent time in airports, drove hundreds of miles in cars and taxis and do you know what I did differently? I looked up. I put technology blinders on and began to do what I did more of years ago. I began to converse with those around me. I chatted with perfect strangers and passed the time. I helped a man who had a terrible fall at one of the venues where I was speaking. He smashed his face and was bleeding heavily. As a nurse, he needed me. I stayed until help arrived. I was able to alleviate his fears, his embarrassment and was able to spread a bit of kindness and empathy.

As the days went on, I held doors and shared smiles. I ate meals with complete strangers. I made new friends. I listened to people telling me tales of losing their favorite chickens. I met people and had deep conversations about meaningful things. With these blinders on, I unplugged and connected at a personal level with life around me. It felt good to live in these real moments. It felt good to realize that what is important is always what I chose to put in front of me at any given time in my day. So chose your family, chose friends, chose neighbors, chose those in need, chose those where you can make a difference. Even if the person right in front of you is a stranger.

What I learned these past two weeks is that kindness still exists and people as a whole need to give and receive a lot more kindness and compassion in their lives. Everyone is bearing their own burdens. A simple act or ounce of shared kindness creates memories that live in people’s hearts for years to come. Kindness is never forgotten.