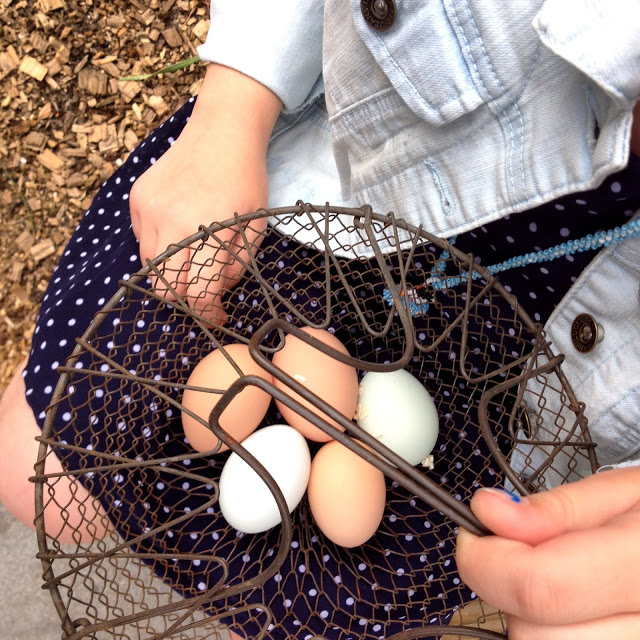 The Hen’s Reproductive System and Issues

If you think about it, chickens lay hundreds of eggs during their lifetime. Many times their eggs arrive just on schedule just as predicted; gorgeous warm orbs of goodness. Hens are amazing! Although rare, sometimes reproductive system and egg laying issues arise that leaves chicken keepers scratching their heads. We’ve all had weird eggs. The perfect place is to start is inside the chicken and what leads up to the laying of an egg.

Fact: The darkness of the egg yolk is determined by the amount of xanthophylls that a chicken eats. Foods high in xanthophylls include yellow corn, grass, and marigold petals.

The ovum is the yolk portion of the egg and that is made in the ovary. When the ovum is complete, it is released into the oviduct. This is called ovulation- the same as in people. While the ovum travels down the oviduct the other components of the egg are added including the albumen (egg white) as well as the shell. Just after the egg is laid, the hen’s ovary releases another ovum into the oviduct within the period of about an hour. This is enables hens to lay an egg approximately every 26 hours

The oviduct is about 26 inches long. It twists and turns over on itself in the hen’s body. It is comprised of 5 parts. I have listed them in the order from beginning to last:

Infandibulum: Fertilization takes place here. The egg is here for no longer than a quarter of an hour. This muscular part of the oviduct moves to “grab” the ovum. This is the first step to becoming an egg.

Magnus: This is the longest part of the oviduct and here is where the albumin is added to the egg.

Shell Gland aka Uterus: Here calcium from the hen’s bones is used to add the shell to the egg. The shell’s color is then applied. The egg spends up to 20 hours in the shell gland for it’s finishing touches.

Vagina: The vagina is all muscle and helps to push the egg out of the hen’s body. It is also where the protective bloom is added to the egg that seals out bacteria, viruses and so forth.

Fact: Sperm glands are located where the shell gland meets the vagina. Here a hen can store a rooster’s sperm for up to 2 weeks! As the hen lays her egg, sperm is simultaneously excreted from the glands back up into the infandibulum to fertilize the next egg on the journey.

Types of Weird Eggs and Why They Happen

Let’s talk about those weird eggs now. Here are some of the more common ones that backyard chicken keeper’s come across.

Double Yolker: When a hen releases two eggs (ova) into the infandibulum at just about the same time.

No Yolk: When a bit of the oviducts lining has sloughed off and the chicken’s body is fooled into thinking it was an ovum. Tiny eggs with no yolk are typically called fart eggs or wind eggs.

Shell-less Eggs/Rubber Eggs: Usually an indication of a nutritional deficiency- Calcium, Phosphorus or Vitamin D. New healthy pullets also lay these eggs until their bodies get the “hang” of it. Read more about these weird eggs here.

Blood spots: Can occur when a hen is more physically active during ovulation. A bit of blood from a local blood vessel is deposited. They are safe to eat.

Meat spots: Found close the albumen of the egg, it is simply a bit of oviduct that sloughed off while the egg was in production. They are safe to eat.

Egg inside an Egg: Wow! These are rare and very weird eggs. The egg that is just about ready to be laid, is turned around and goes back up into the oviduct for a double application of albumen and shell.

Salpingitis & Lash Eggs:  Salpingitis simply means inflammation of the oviduct. This is usually caused by E Coli or Salmonella and sometimes a virus. Sometimes it requires antibiotics and other times it resolves on its own. During this time hens can lay a “caseous mass of pus” this is what folks call a lash egg. Laying a lash egg should not be a death sentence. These hens can live years after they lay one.

Complications of Egg Laying for Chickens

Egg Bound Chicken: When a hen is unable to pass an egg due to size. A soak in a warm bath with Epsom salt can sometimes help. Sometimes the egg breaks inside prior to passing. When this happens, parts of the eggs, including yolks and shells make their way back up into the reproductive tract and can lead to infection called egg yolk peritonitis. This can be fatal.

Cystic Oviduct: When the right ovary and oviduct try to function in addition to the left. This can lead to ovarian cysts and a swollen abdomen for the chicken. They can sometimes be drained by a veterinarian.

Vent Prolapse: Often the first sign of prolapse can be blood streaked eggs. Although this is normal when young chickens (pullets) begin to lay. A portion oviduct protrudes from the vent. To treat and prevent other chickens from pecking, remove the hen. Place her in a dark place with food and water to help prevent egg laying from being stimulated. Apply 1% Hydrocortisone cream to the vent twice per day. For severe cases seek assistance from a veterinarian.

Learn why chickens lay all their eggs in one nesting box.

7 thoughts on “The Hen’s Reproductive System and Issues”