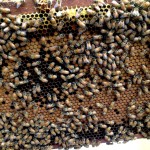 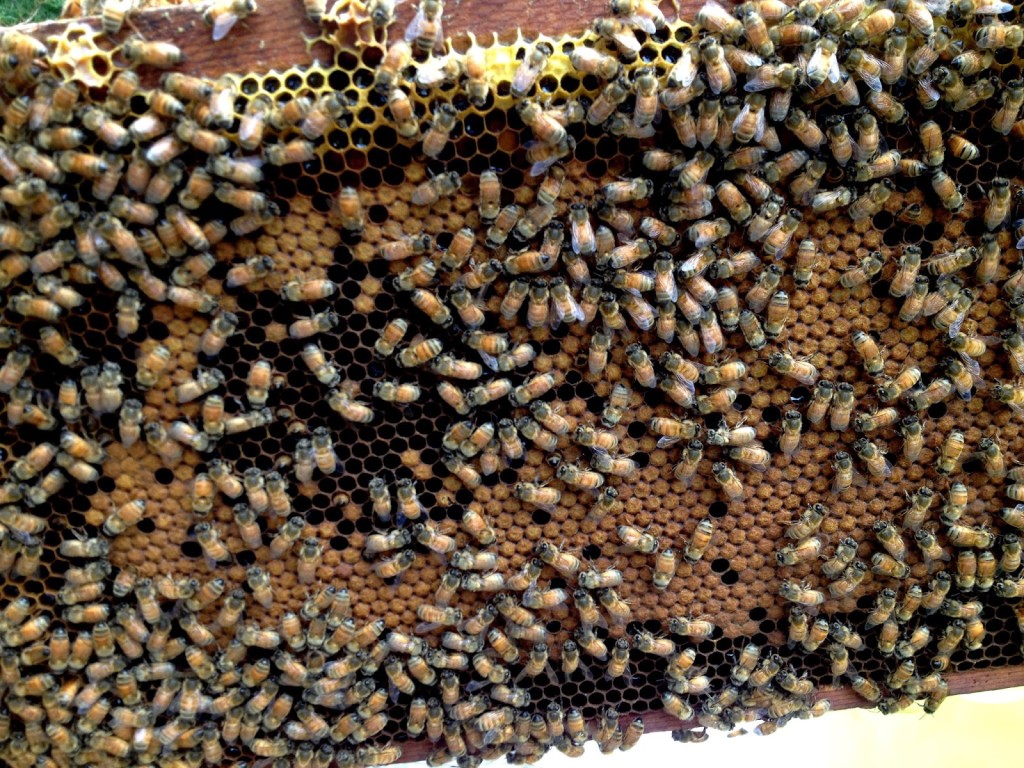 About a couple of week’s ago, one of my hives had practically succumb to a complete death. A day or so after I witnessed that, I began the rebuilding by adding a few frames of brood from another hive and two frame of honey. This past week, we combined an early summer nuc that we made with this weak hive with the hopes of a strong hive that will survive the winter. There a variety of reasons why folks combine beehives. 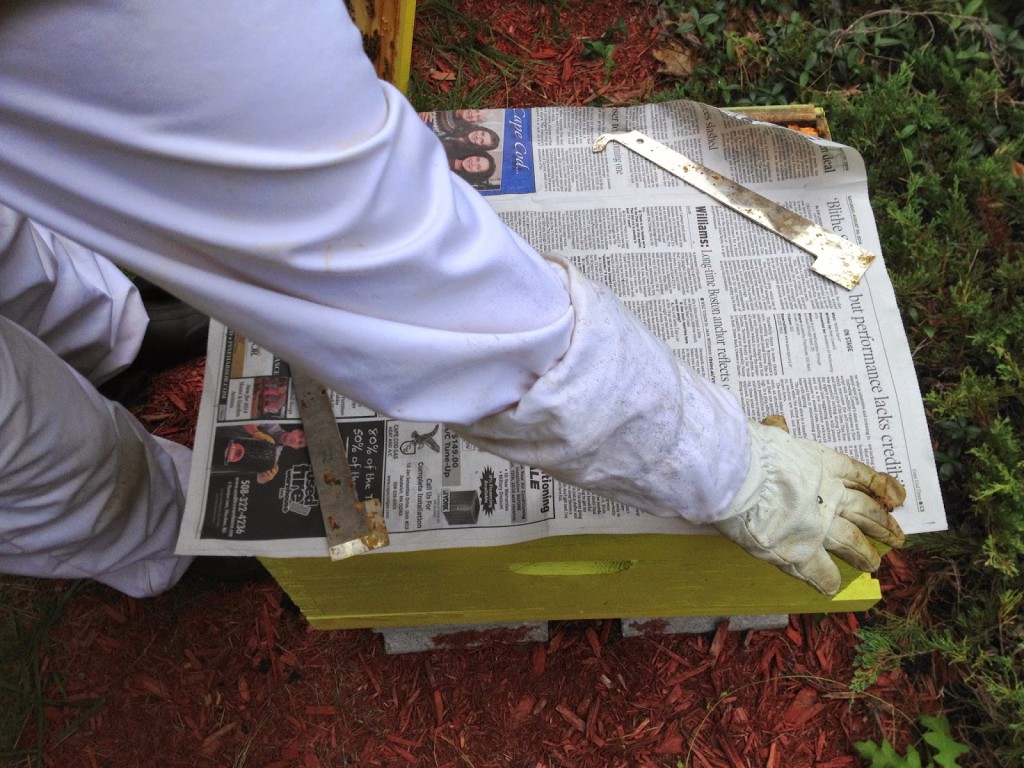 First we inspected the old hive that originally had problems. They looked great! All of the brood had hatched from the introduced frames a couple of weeks prior. There were no queen cells and no signs of any problems. There was still plenty of honey. We poked a bunch of holes through a single sheet of newspaper and placed that over the top of the existing hive. Poking the holes will ensure that the new queen’s scent will permeate the entire without the bees meeting just quite yet. If we didn’t do this, the bees would fight til the death! 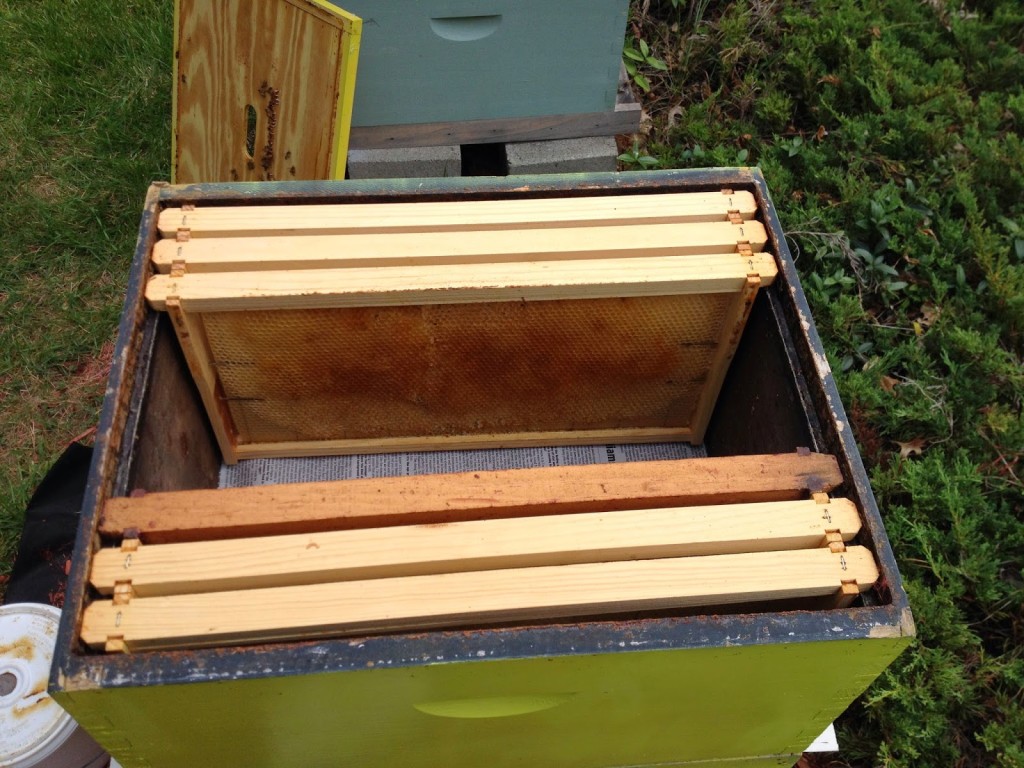 As the nuc we were adding to this hive only had 4 frame (a feeder taking up the space of the 5th frame), we needed to add 6 frames to this hive. We spaced them like so. The frames from the nuc will be kept in the exact same order and placed in the center of the box. 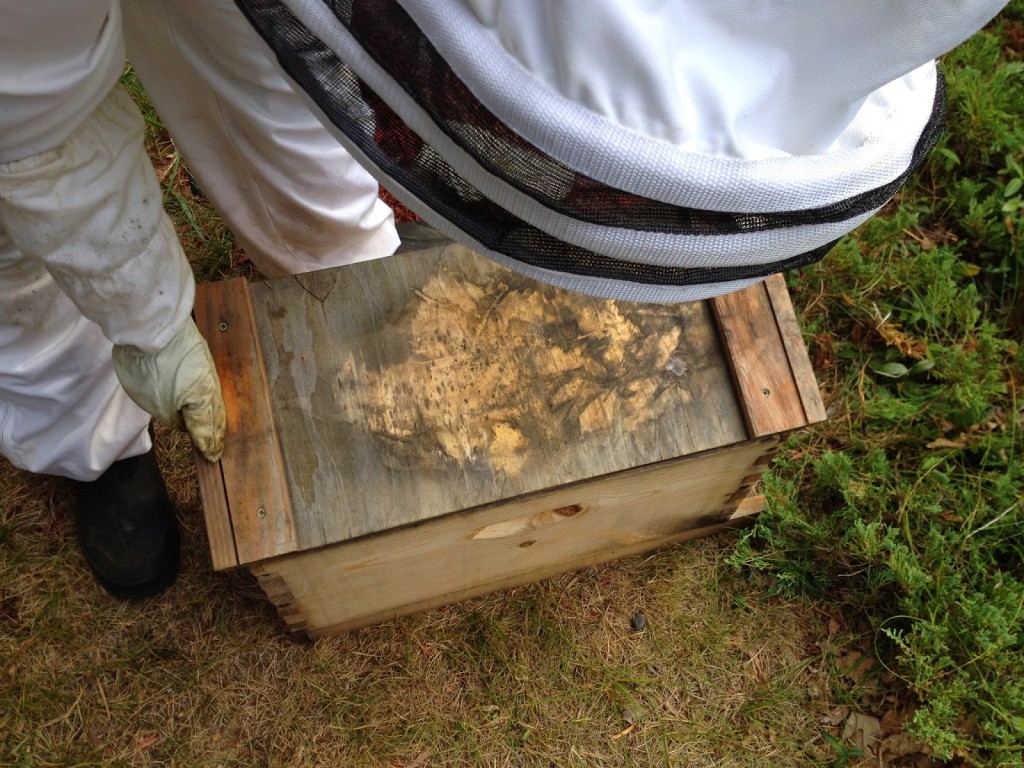 Finally, when ready, we lifted up the lid of the nuc. 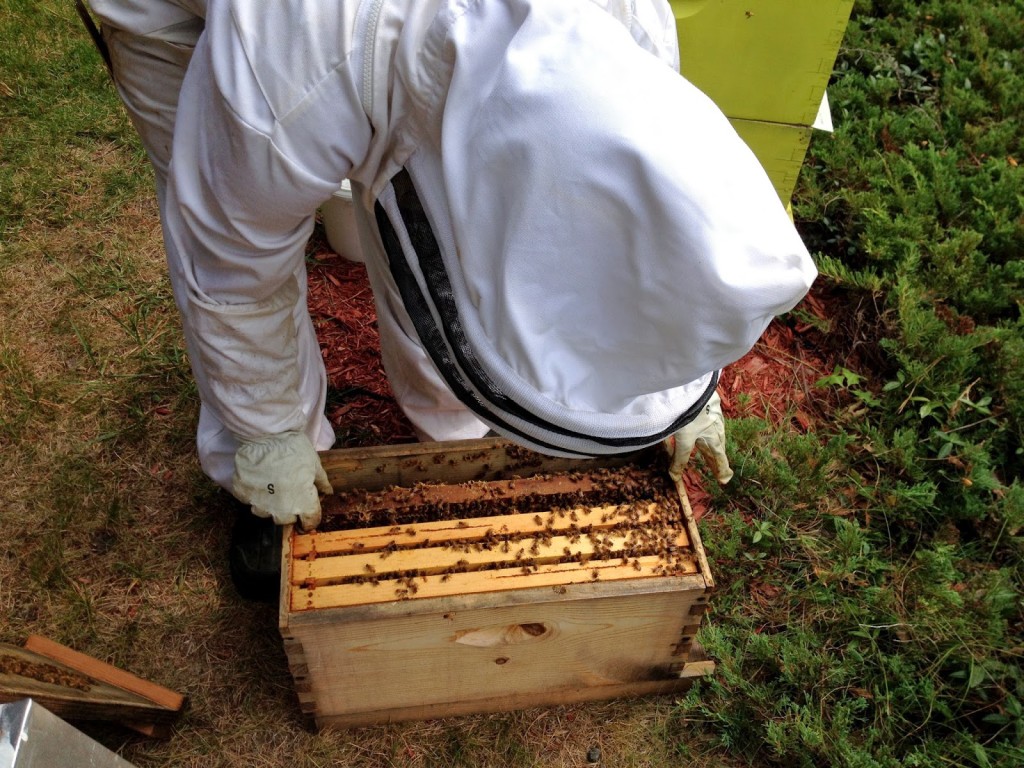 It was bustling with bees. We removed the feeder first. It was empty and full of bees. Then one by one we placed the frames in the hive. 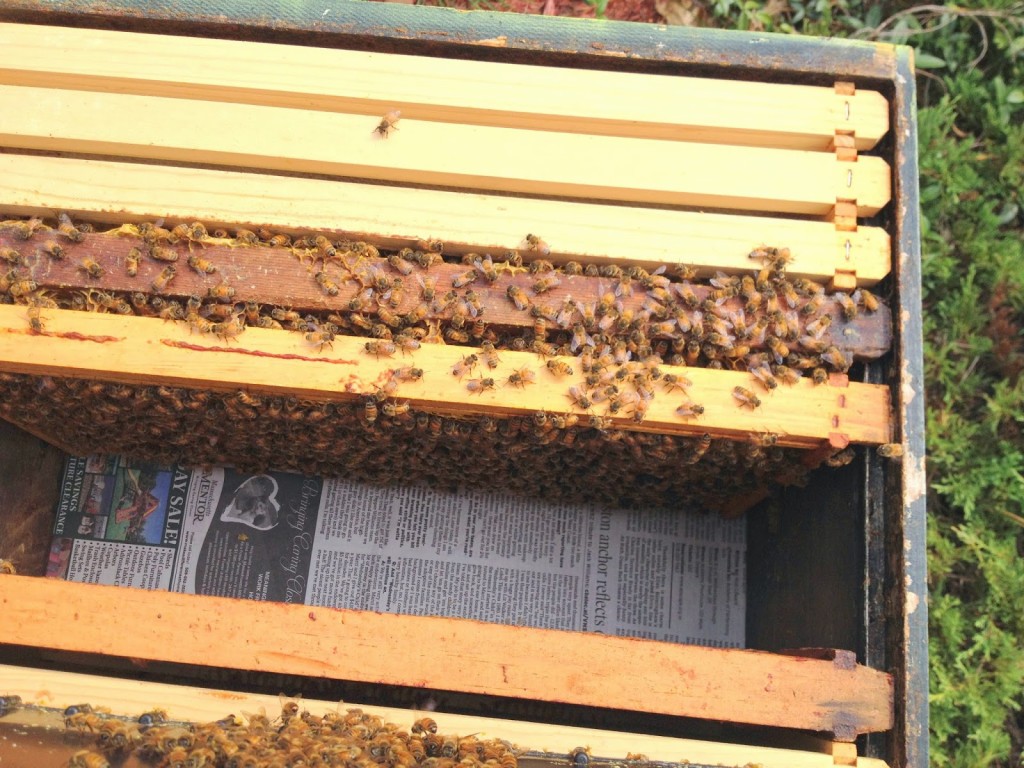 Slowly and methodically we added the frames. The bees and the queen looked awesome! We shook the bees from the feeder on top of all the frames and added the inner cover. 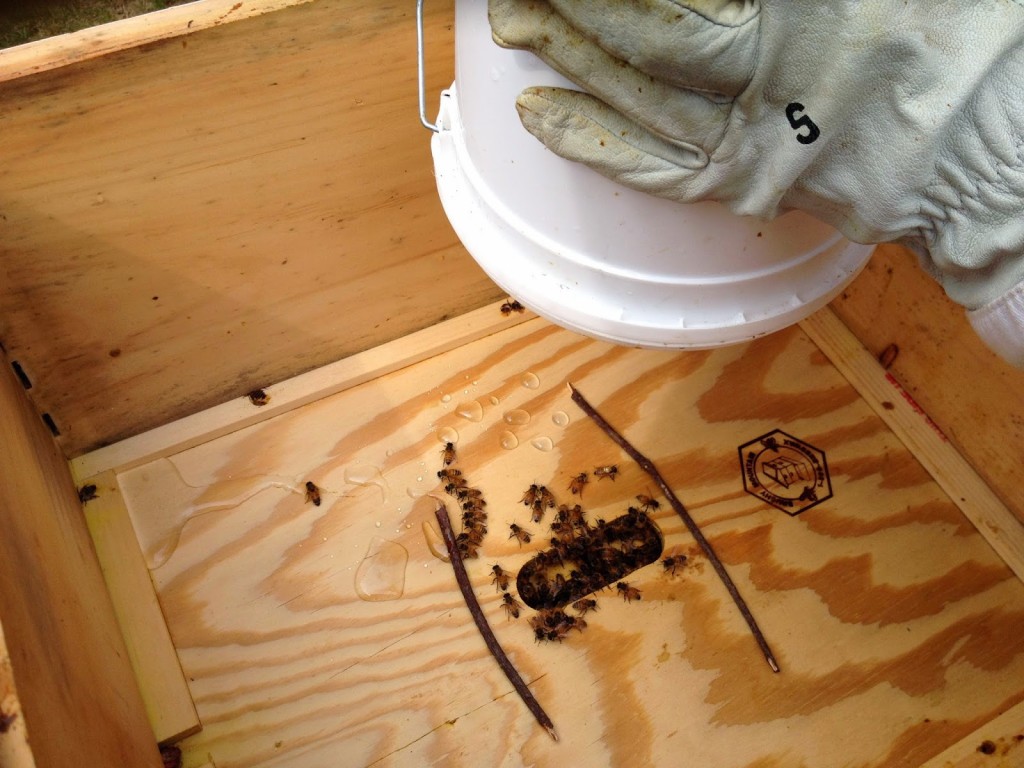 Since the new bees we added had very little honey stores. On top of the inner cover, we added a feeder full of sugar syrup and Honey B Healthy. The two sticks act as a way for the bees to move around the feeder. We blocked off the entrances to this upper box that is hiding the feeder. This will prevent robbing, as it is robbing season. We simply plugged up the entrance with a wood chip that fits. 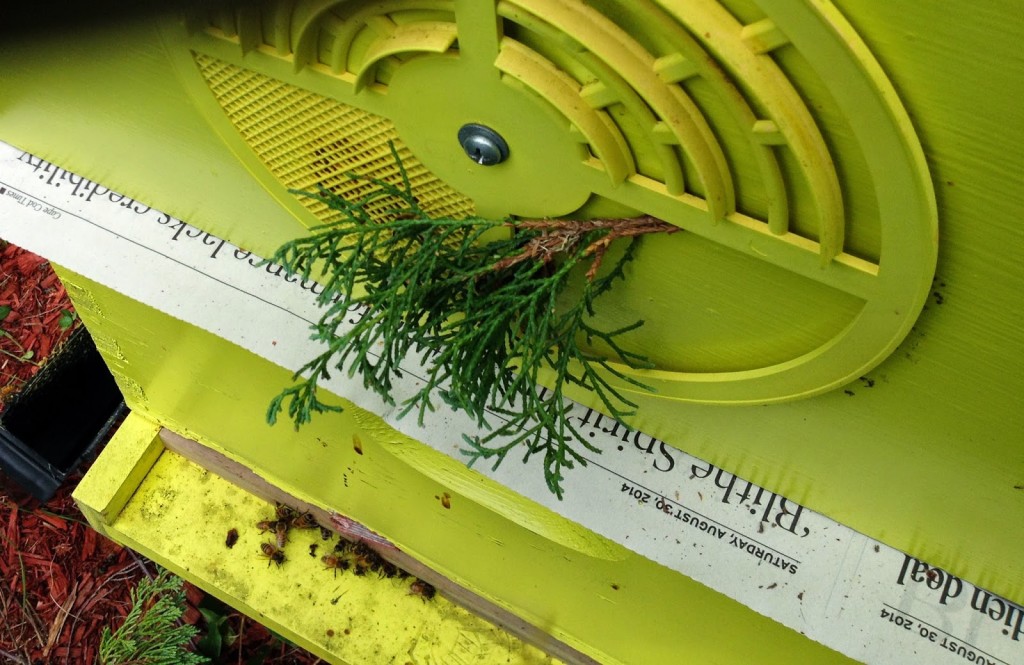 The entrance on the front of the deep is opened half way and an evergreen branch is placed in front. This forces the bees to reorient to their new home’s location. I will remove it in a couple of days. The bees go right through it. 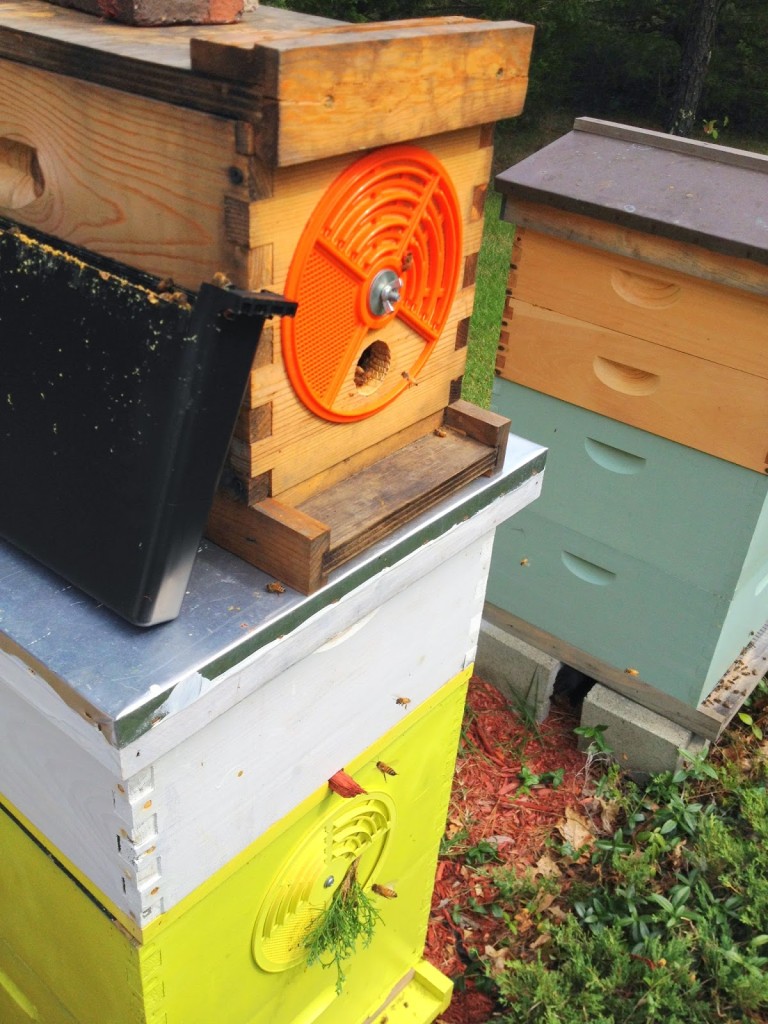 Here is the hive immediately after the combination. Two hives became one. The hive on the bottom uses the bottom board entrance that has had the entrance reducer on since it was so weak. The new hive is in the second green box on top. The newspaper is between them. On the top of the hive is the old nuc box. It is completely empty. Some bees are still in there and will not discover where their queen has gone immediately. They will sense where she is within a day or two and join the new hive. The feeder although empty was still with a few bees. I left it on the side for the bees to vacate for about an hour or two. The bees, working from the top and the bottom, should chew through the newspaper in a couple of days. Once the hives are combined, they will function as one.

Can you do this as a beekeeper? Yes!

1 thought on “Two Beehives Become One”