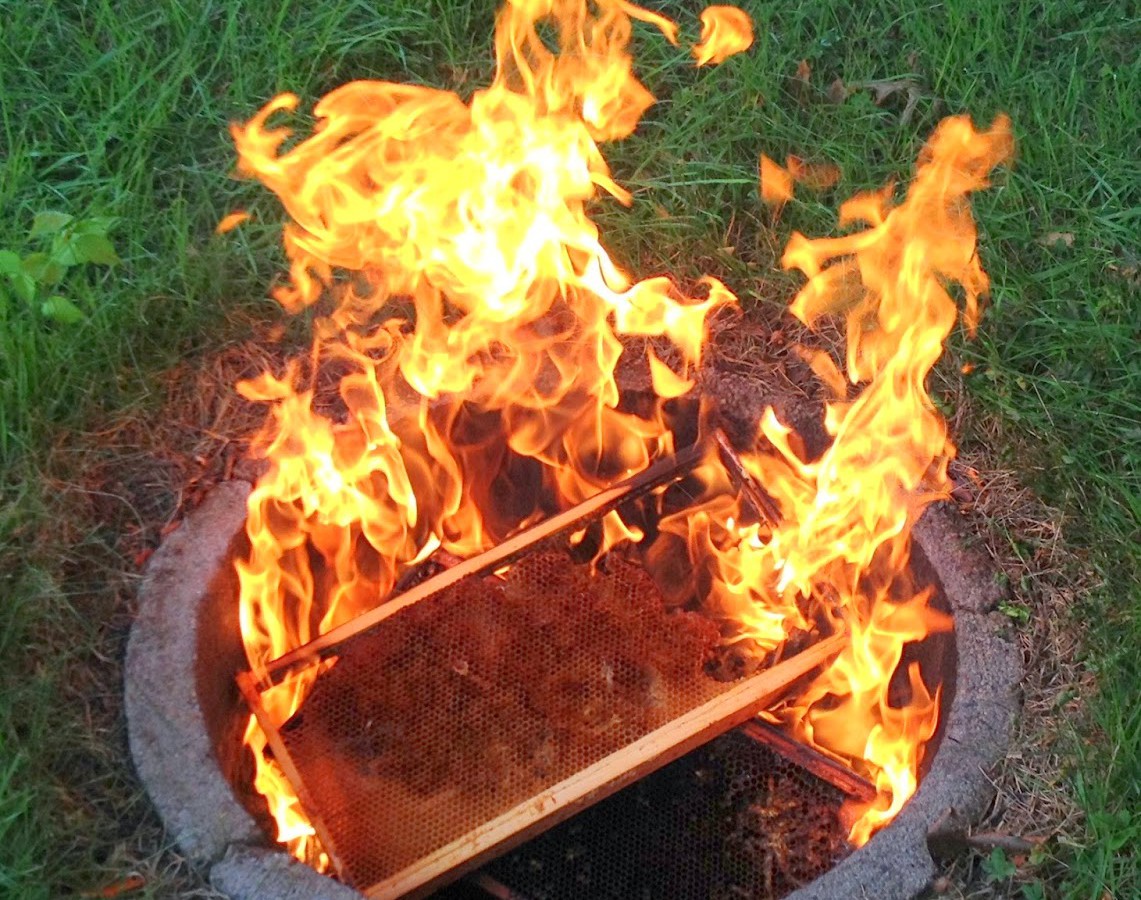 I watched one of my beehives die this past Thursday. Wax moths moved into the hive.

Someone must have sprayed their blooming plants. The plants were full of blossoms and my unsuspecting bees went. They drank the nectar and shared the bounty and location with the rest of the hive. There I sat in front of it, watching dying bees literally fall out. I sat there until dusk. Hundreds were dead. Some barely still alive in the pile outside the hive. There was nothing I could do but sit there and pray for them to be out of their misery quickly. I am hoping that none of the other hives went to that location. In nursing, I’ve seen many terrible things that have left a mark on my memory and heart that I can never forget even if I wanted to. Thursday, was another one of those days.

Friday I returned. There were scores of dead bees outside the hive. I opened the hive. Sadly, I found the queen. She was flailing around and curled up. She appeared to be dying. The hive was also being robbed. Inside I found yellow jackets and bumblebees. I also found wax moths. There were a few larvae of the wax moths and wax moth eggs. Working quickly, I removed any frames with signs of wax moths.

I then went across town to my strongest hive. From that hive, I took two frames full of brood and the bees. I also retrieved two deep frames full of honey that I had in reserve. I returned to the ailing hive and placed those frames and honey in the upper deep with a layer of newspaper between them. This hive needed numbers. The newspaper would allow the bees time to accept one another before they chewed their way through. I closed it up and let it settle. I reduced the entrance.

I visited again today, I found the dead queen. I shrank this hive down for lack of population to one deep. Some decisions need to be made. This hive will never survive in this state-queenless and depleted.

I have a couple of options, There is a nuc that my friend and I made earlier this summer that I might combine with this hive. I fear it is too late for them to make another queen, although it is not impossible.

Early this evening, my Mom and I burned the frames with the wax moth eggs and larvae. This is one way to eliminate them. The other way is placing the affected frames in the freezer for a few days. I stood there and watched. All of the bee’s hard work was gone in flames and smoke. Out of respect I waited until the flames went out.

I will do what I can to rebuild this hive or combine it with another. I have pledged a commitment to the honeybees and their cause. Tomorrow is another day.

If you are a homeowner, please consider how, when and why you apply chemicals to your yard.

23 thoughts on “A Dying Beehive”