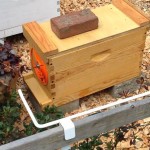 How to Split a Beehive

This week. I wanted to share how I split a beehive. All beehives that overwinter should be split come spring. This helps to prevent swarming .

Once you begin researching about splitting beehives, you will soon come to realize that there are several techniques that can be quite successful. Out of my three hives that went into winter, only one survived. The lone survivor is now bursting at the seams with bees! This hive needed to be split or I would run the risk of losing half of its population to swarming. When hives are this large and robust, often they will swarm in spring. When this happens, the queen and half the population will leave the hive to make a new home. The bees left behind will continue to survive and raise a new queen from the babies left behind. This week, the weather finally warmed up enough and I could do the split.

Warm weather is always a very important thing to consider, especially paying attention to nighttime temperatures. Young brood (bee babies) can easily chill and you must keep this in mind when you are disrupting the populations in the “mother” hive. Chilled brood can cause the entire new hive to fail.

To make a split you will need:

On a warm sunny day during the late morning, most of the hive’s population will be out foraging. This is the best time to work. In the nuc box, arrange the frames so that the honey filled frame is in slot number 1 and the two frames with foundation are in positions 2 and 5. The two brood filled frames that you take from the “mother” hive will go in slots 3 and 4.

Once you have the nuc box arranged as so, open the hive and smoke the bees.

Begin inspecting the hive for eggs, larvae and capped brood. You will need to take two frames full of brood. However, first you must locate the queen. You do not want to inadvertently take her. (Sometimes, queens are taken but that is usually when they are older or aging. If she is healthy, robust, and laying let her stay.)

Once you locate the queen, return the frame she is on and take two other brood filled frames and place them in slots 3 and 4. Then take two more frame without the queen and shake the bees off those frames into the nuc box, taking only the bees only. You will need enough bees to work this nuc.  Then quickly close up the nuc and block off the entrance until the hive is situated in its new location.

It is optimal to move this new nuc to a location at least 2 miles away. However, sometimes that is not always possible. That is okay. Whether you relocate the hive or place it next to the old “mother” hive, place a leafed branch in front of the entrances. This way it forces the bees to re-orient themselves to this new hive as their home. When the hives are placed next to one another, you may see some drifting of the nuc bees back to the “mother” hive. It is important to realize that the nurse bees that you took who were on those two frames of brood, will remain with the brood not matter what.

Leave the nuc alone for two weeks. Then in two weeks time check the nuc for signs of a new queen- specifically queen cells. If there are no queen cells, then swap out another frame of brood from the “mother” hive into the nuc and recheck again in two weeks.

12 thoughts on “How to Split a Beehive”