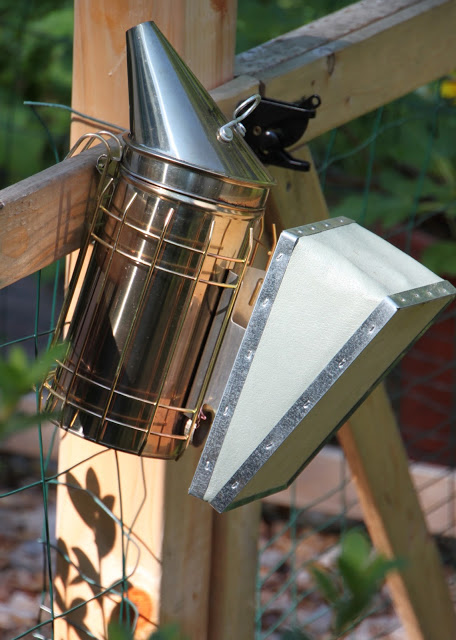 It had been approximately three weeks since I had last inspected the hives on my property entirely.  It was time to go in yesterday and take a peek at the bees’ status.  The first hive I opened was Briar. Everything looked great! There were eggs, lots of brood and the two lower deeps were filled with honey.  The bees started filling the first frame of the honey super and their mood was pleasant.  The girls were content to line up on the frames in the hive and stare up at me with curious little bee eyes.  They left me alone and did not care that I was inspecting their home sweet home.

Next it was onto Willow.  Why do I always dread opening this hive?


Like Briar, I smoked the hive and the bees were calm. I opened the hive and inspected the honey super. There were bees crawling on the frames but no honey yet.  I removed the super and took a look at the upper deep. There were plenty of bees. I removed the first frame for ease of manipulating the hive. It was empty except for bees. I had expected to see some honey here. I removed the next one-same thing. I removed the third and I found brood and larvae but still no honey or pollen. I removed the fourth frame and found the same thing and the queen.  She looked good.  She was robust and active.  In one tiny patch of this frame I found a very small oasis of uncapped honey.  I continued inspecting the entire hive and found the same thing. The hive was completely empty of all the bees’ honey and pollen.  The deeper I went into the hive the bees were also irritable and angry.  They were bouncing off my veil.  They were stinging my gloves and my suit.  It was time to wrap things up quickly. What happened?  I did not know quite yet, but I knew that they needed to be fed.

Immediately I headed inside and made up some 1:1 sugar syrup with Honey B Healthy. As it cooled, I investigated.  This is my second year with the hives. Last year, I fed the bees all the way up until July as they were new nucs. They were starting from scratch.  Both of these hives had overwintered. This year I am learning about the maintenance and needs of an established hive. I went to my bee journal and reviewed my observations from Willow.

This hive came out the strongest from last Winter. In fact I thought I was going to have to do a split!

I had issues with brood in this hive early on this year.  The queen took a break in laying.  I had no idea Russians did that!

It seems as though there has been a very recent population boom.

We have been having record temperatures and dry humid weather.

July on Cape Cod usually sees a nectar dearth. I just learned this! The nectar should begin to flow again come August with the blooming of the Sweetpepper Bush.

I have determined that this hive must have had a population swell and the bees during this time did not have enough food to raise the brood and feed the bees that were already in existence.  Those poor bees!  They were starving.

I peeked in top of the hive this morning at the feeder. The bees this time could care less that I was there. They were busy taking in the sugar syrup. The feeder is already 1/3 empty. So, I will continue to feed this hive until they stop taking the sugar syrup.

Summer dearths are not uncommon and bees can starve if they are left without resources.  The good news is that bees returning to the hive this morning had their pollen buckets on their legs full.  They are still out there working busy as bees.  They just can’t keep up with the feed demands of this voracious population.