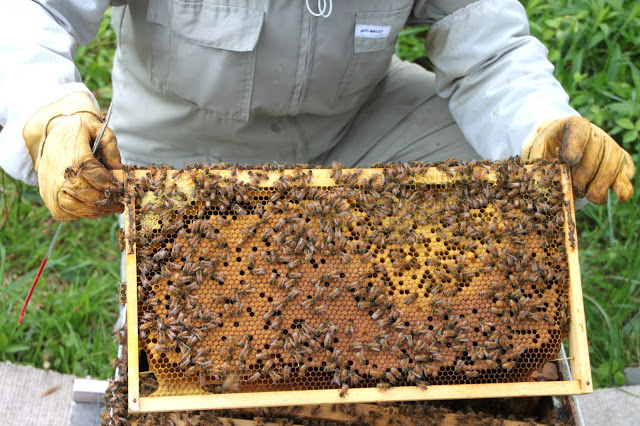 It has been a little while since I have shared any updates about the bees but that does not mean that they have been quiet.  In fact, they have been very busy! I even added another hive on a nearby property.

When we last left off, I had inspected both hives-Willow and Briar.  For an update see this post and this one too. With my mentor, my beekeeping friend, and myself we had found the queen in Willow.  She looked good-nice and plump and active.  Her abdomen was a beautiful caramel color.  When it came to Briar, all three of us had searched for the queen to no avail.  So we decided to re-queen Briar.

After three days of waiting for the hive to get used to the queen and her attendants. The time came for me to uncork her queen cage and set her free inside the hive. I quickly maneuvered around the bees crawling on her cage, opened the cork and placed the queen cage back on the frames. I verified she was still in the cage and closed the hive.  Three days later, it was time to inspect the hive again.  By now the queen should have been laying and I should have seen plenty of brood (babies) and capped brood.  But to my surprise there was no brood.  I searched everywhere!  I did not find the queen and the overall numbers were still low. What the heck? I closed the hive.


The next day it was a brilliant warm and sunny day. I decided to go in again, take my time and really look through the hive with a fine tooth comb.  I removed the first frame, then the second and then the third.  Then I saw what appeared to be a big black ant!  In fact, it wasn’t an ant at all.  It was the queen of Briar!  In this typically robust hive, I had always seen evidence of the queen but I had never laid eyes upon her.  This is why.  She is so incredibly dark that she blends in amazingly well and her color is so different from any queens that I had seen in classes and in other local hives.  Wow!  What a shocker.  She was moving around the frames, appeared robust, active and nice and plump.  I closed up the hive as I had proof that she was there.  She must have killed the new queen that I had introduced.  It all made sense-sort of…but why was there no brood?

I needed to think outside the box so I called a dear friend, Anita of Beverly Bees and thank goodness I did.  I explained all that occurred and the first thing that she asked me was, “What breed are your bees?”  I told her that they were essentially mutts-Russian, Italian, Australian, German and Carniolan.  However, because the one queen was so black genetically, I believed that Russian traits were expressed the most.  She then informed me that when other breeds are laying like gangbusters in the spring, Russian bees often take a break from laying.

Sure enough, I discovered that Russian bees will often take a break from laying eggs from the first dandelion bloom to the next bloom in spring.  I looked outside at the lawn. The dandelions were blooming.

Click here to read about more about my beekeeping adventures from the beginning.