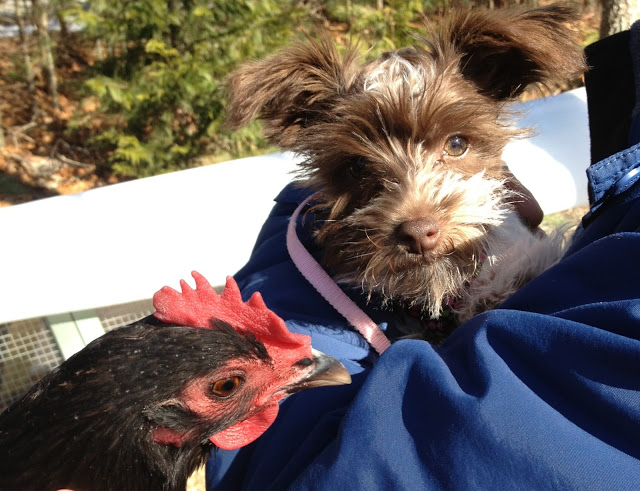 Introducing a Puppy to the Flock~Part 1

This past January, we added a sweet Miniature Schnauzer puppy named Sara to our ever growing menagerie of pets.  All two and a half pounds of this eight week bundle of joy arrived into our lives.  Over the past nine weeks we have had time introducing her to her new life.

Since day one, the chickens knew something was up. As they peered from the run, they spied me toting a little leashed animal around the front yard through the snow drifts.  They too were curious.  Every hour I would return.  The chickens would see me.  They were confused.  What was that little furry thing that had Mom’s attention?

As the days turned into weeks, Sara eventually noticed the girls.  The chickens would chatter and even sound the alarm.  We kept our distance.  Sara had to learn to understand that the chickens would be visited on my terms and not hers.  It was not time yet.  Sara finally learned to ignore the coop and the chickens despite their noises.

After a week or so, I decided it was time to check for eggs with Sara.  After Sara finished her potty business, we headed over to the coop. I kept her on a very short leash.  The girls were safe in their run.  Sara was a tad bit nervous.  She sniffed at the girls.  I lifted up the nesting box lid and let her smell the eggs.  Our visit was brief and then we returned into the house.  She did well.  She did not bark.  From that point on, we began to explore closer to the coop and the chickens.  Sara learned that the chickens were part of our lives.  She had accepted that they were part of her outdoor environment.

This past week, I decided to have our dog behaviorist help me to introduce the chickens one by one to Sara-up close and personal.  As he held Sara, I scooped up each hen and let Sara and the girls know that everything was okay.  I was careful to keep the chickens away from Sara’s face, as they will go for the eyes.  Of course, my lap chicken Oyster Cracker was first. She has become so heavy over winter.  I lifted up this ten pound chicken into my arms.  She was leery but soon allowed Sara to sniff her and get to “know” her.  Sara too was told to be “gentle” and “nice” and was given lots of praise during the process. When it came to Tilly’s turn, she too was a doll.  She even tried to engage Sara in a bit of chicken talk but using her “Bud Budup” phrase meaning, “How are you?”

Lastly, Feather emerged and wanted to meet Sara too.  We had them meet on the ground.  Sara was told to “sit and stay”.  She did.  We kept about six inches between them and just let them hang out.

The entire interaction was about 20 minutes.  Overall, I feel it went very well.  It will continue to take a great deal of time and energy, but eventually my goal is to have Sara and the girls get along famously.  A family dog is a wonderful way to help keep the flock safe from predators.

DISCLAIMER: Introducing a new dog or puppy at any age to the flock can be risky and dangerous.  The dog and the chickens can be harmed if you are not careful.  This post is for informational use.  If you choose to use any of these techniques, please use them at your own risk.  We will not be held accountable.  When possible, it is always best to rely on a professional dog behaviorist/trainer for help.

9 thoughts on “Introducing a Puppy to the Flock~Part 1”