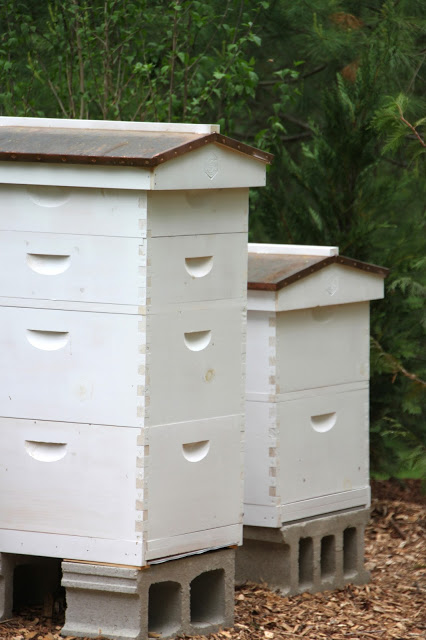 Preparing the Hives for Winter

Winter preparations have begun. This week I took the honey supers (honey collectors) off of the last hive. Three weeks ago these two supers were half-full of uncapped honey. As I removed the supers, they were barren of honey. The bees must have moved it or consumed it during the last few colder days. Click here for parts of the hive.

I’ve enjoyed watching the hives as the cooler temperatures arrived. The summer bees began to die off. Tiny piles of bees were collecting outside the hive. The queen has switched gears and begun to lay winter bees-hardier bees that have a longer lifespan designed especially for surviving the winter.

The drones, the male bees, were also evicted from the hive. With mouths too small to eat for themselves, they are dependent on the female worker bees for feeding. In the winter, they are not necessary for survival. Male drones never mate with their own queen and mating with outside queens will not resume until spring. One by one the worker bees carry the drones away from the hive, abandoning them in the wood chips. Other drones buzz by my head, frantic to enter the hive. Yet they are turned away by the female guard bees. They are desperate and confused. My heart goes out to them. The drones are defenseless. With no stingers, they are at the will of the female colony. The drones will all be eliminated from the colony before the first frost. Come spring, the queen will begin to lay drones again. For now, the colony will only consist of females.

In both hives, the deeps are chock full of honey and pollen. The bees have been busy storing. They will need 60 to 80 pounds of honey to survive winter on Cape Cod. I did decide to feed them a 2:1 sugar syrup to help bolster their food supply. Once the weather reaches 57 degrees, they will begin to go into their tightly formed ball of bees called a cluster.

Breaking from the cluster will only occur at 40 degrees or higher. During this time the bees will slowly move to more food sources within the hive and also take a moment to go on cleansing flights. Bees will not evacuate their digestive tract in the hive. When in cluster, the queen stays in the warm and toasty 95 degree center as the other bees take turns on the outside of the cluster.

I will be making a candy board for the bees to place on the top of the hive as back-up feeding in case they exhaust their stored resources for the rest of the winter. I also inserted hardware cloth mouse guards into the bottom entrances. So for now, they are essentially tucked in with not much more for me to do but wish them well as we head into the colder weather and season of winter.

I consider my first year with the bees a huge success. In both hives, their numbers are plenty. They have built out their hives and filled them with what they need to survive the winter. They also managed to build out 30 wax foundations in the honey supers.  This will be a great head start when the nectar begins to flow in the spring.

13 thoughts on “Preparing the Hives for Winter”