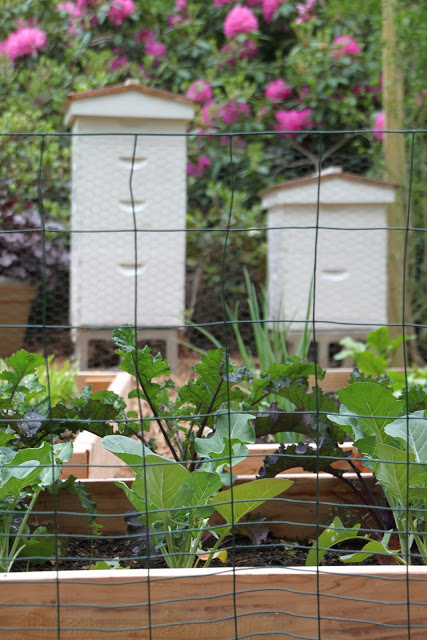 It has been one week since I installed the nucs into their new homes.   The entire family has enjoyed watching the hives from the kitchen window.  As we eat breakfast, we watch the bees zipping up into the sky, making literally a “bee line” to pollen locations.  Amazingly, every few seconds bees dart very quickly from the entrance up to the sky like tiny little rockets.  Around the entrance, we see returning bees hovering loaded down with pollen.  There is a traffic jam.  Everyone is waiting to come inside and be unloaded.  As these bees return from foraging, younger bees in the hive wait to unload both pollen and water from the foraging worker bees.  Once unloaded, these bees proceed to dance to tell the bees the location of this freshly harvested pollen.  The dance is based on the sun’s location in the sky.  Unloaded and danced out, the bee then quickly makes a bee line out of the hive back to the pollen location.  We are fascinated.

After one week, it is important to check on your bees for a few reasons:

1.  Check to make sure there is brood (babies)
2.  To see if the hive is growing.  Are the bees building out the new frames with wax foundation?
3.  Are there any signs of disease or problems?
4.  Can you visualize the queen or signs of the queen?  Without a queen the colony will struggle or even fail.
5.  Do the feeders need to be refilled?
6.  Do you need to add more room for the bees to live (another deep super)?

My friend, Alicia, came over and we opened the hives together.  Instead of smoking the hive, we tried using the Honey B Healthy.  The Honey B Healthy is supposedly better for the bees than the smoking.  When you smoke the bees, instinctually they are driven down into the depths of the hive making it easier for one to manipulate the frames.  However, the bees are lead to believe that there is a fire.  They are down in the hive gorging themselves with honey in the event they must leave the hive and find a new home.  After gorging on honey, it takes the bees a few days to recuperate.  Think Thanksgiving for us.  Those few days are valuable days of foraging that the hive loses.  On the other hand, when you mist the bees with the Honey B Healthy, they are not driven down into the hive.  They are still present on the frames but they are distracted from having to clean their bodies of the sticky Honey B Healthy syrup.  As you work, you can see them busily taking their arms and wiping off their heads and bodies.

We decided to open the smaller, calmer hive.   First we removed the top cover and the feeder.  In order to remove the top cover, I had to break two bridges of comb that the bees had built as ramps from the frames to the feeder.  As delicately as I could, I loosened the bond with the hive tool.  I also had use the hive tool around the inner cover edges as the bees had glued it shut with bee glue called propolis.

Once open, we quickly and methodically examined each frame.  We removed an end one.  The bees had not even begun to build this one out.  I placed it on the ground.  Next we moved on to each frame, one by one.  As we reached the center we visualized brood, capped honey, pollen, new baby bees emerging from their cells and the queen.  However, the bees had only built out about six and a half of the frames in the ten frame deep.  We decided to leave the hive as is and replace the inner cover.  The feeder was still about 3/4 full.  I topped it off with the sugar syrup and closed the hive.

Next we moved onto the larger hive from the beginning.  This hive was more active last week.  The nuc was heavier and the bees were more curious as to my being there.  Following the same procedure as the last hive, we began our inspection.  This hive was bustling!  We never did spot the queen but evidence of her existence was certainly there.  Nine out of ten frames were built out.  The bees were a plenty.

I knew that this hive had a plastic frame that was part of the nuc.  For some reason, bees don’t really care for the plastic frame or it’s accompanying plastic foundation.  Often, they build out comb in a funny pattern on it.  Sometimes they don’t build it out at all.  There were three places on this plastic foundation where the comb was built incorrectly.  With the hive tool, I gently scraped it off and placed it by the hive entrance.  The bees will remove what they need from this comb and hopefully correctly rebuilt the foundation.

We added the second deep with ten new empty frames and wax foundation for the bees to build upon.  The feeder was almost empty.  It was only 1/4 full so I topped that one off too.  We hid the feeder inside two smaller honey supers and replaced the cover.

As newbees, the entire process of opening the two hives took about an hour.  I am so happy that both of my hives are docile.  Yet, it was fascinating to see two hives right next to each other be so entirely different in size, personality and feel.   Most people name their hives and I had thought about this for a while.  After opening the hives yesterday, the names were clear.  The first hive I have named Willow and the second one I have named Briar. 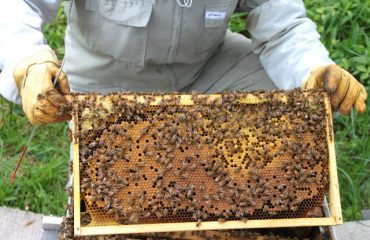 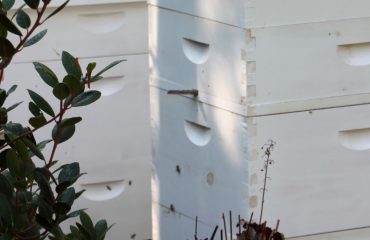 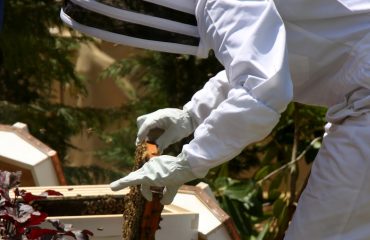