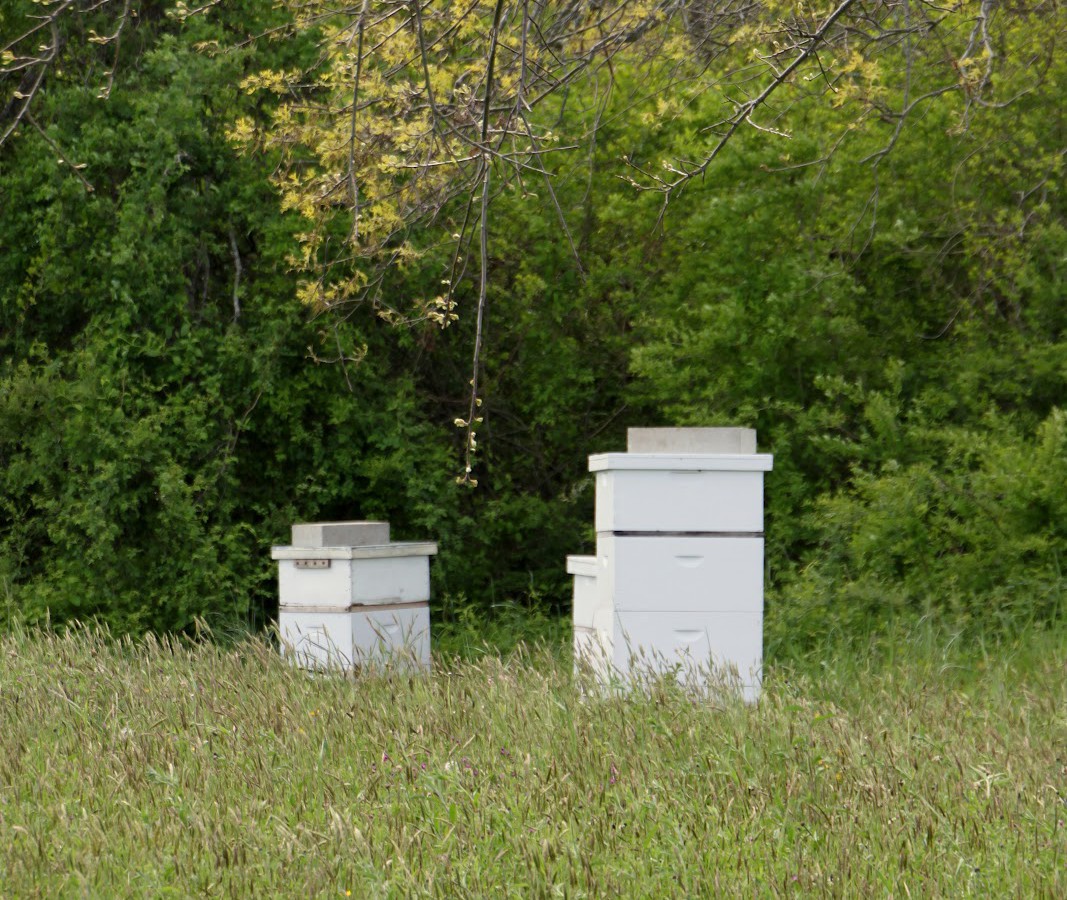 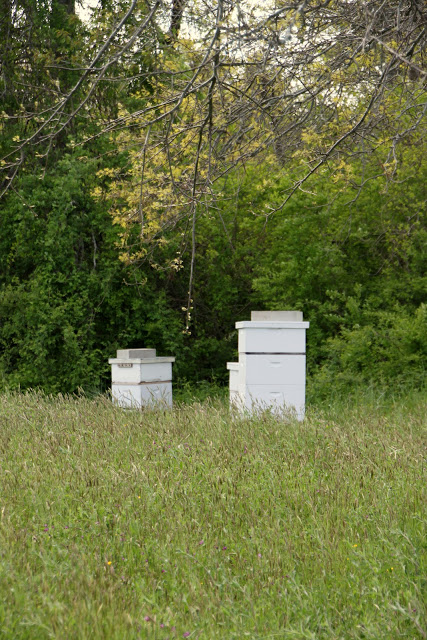 This past Sunday afternoon, I had the pleasure of attending my very first hive opening with our local beekeeping association.  Last Winter, I took their beekeeping course and today, I was getting a close up look at two new bee hives started from packages 4 weeks ago.  Hive openings are best when the weather is around 60 degrees, sunny and in the afternoon when most of the bees are out scavenging the area for pollen sources.  Opening the hive is critical, especially after transferring your bees.  This should be done weekly until they have filled out two deep supers (for Winter survival on Cape Cod) and you have added your first shallow super (honey collector).

When opening the hive, you want to inspect the frames in the supers for a few things:

To see if the queen is alive
To see if they bees are building out frames (adding comb(wax) and filling it with honey, pollen and brood)
To see if there is brood  (babies)
To see if the hive is “growing” at a normal rate
To look for evidence of predators, such as mites or beetles (on the bottom board)
To check the feeders of your bees.  Bees are often fed during the Spring and Fall seasons on Cape Cod with a sugar syrup. 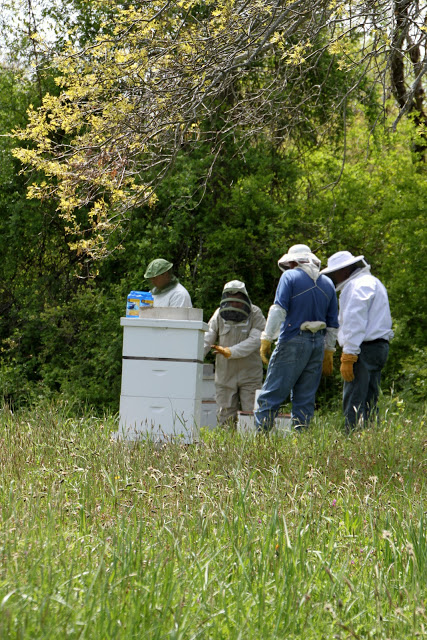 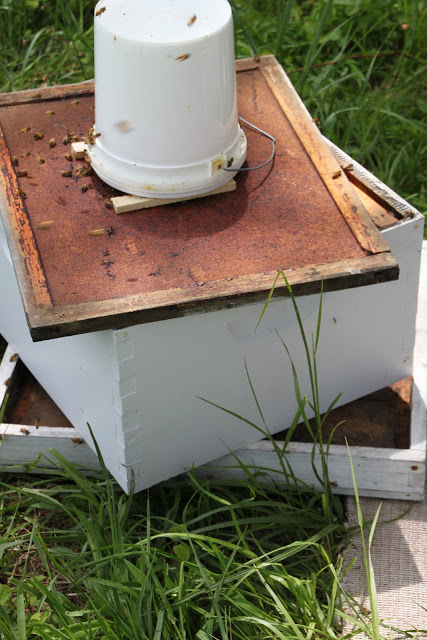 These hives sit on carpet remnants that are flipped upside down.  As the three hives are located in a grassy pasture at this Audubon Sanctuary, the carpet remant keeps the tall grasses from growing up and blocking the entrance to the hives.

The entrance to the hives were still being used, as we opened the hives.  Here you can see the same 1/2 inch hardware cloth that we use in keeping chickens tucked into the hive opening.  This prevents field mice from entering the hive and setting up a warm cozy home. 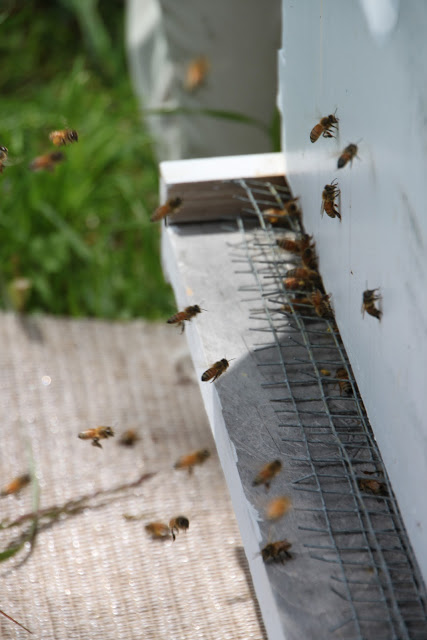 The entire openings took about an hour.  We opened two hives.  The third, had overwintered and is struggling this Spring.  We left that one alone.  We inspected all the frames and verified that the queen was indeed laying eggs, honey was present, pollen was stored and the colony was growing.  On one of the colonies, we even added the second deep with frames.

The inspection always goes easier with the assistance of the hive tool. 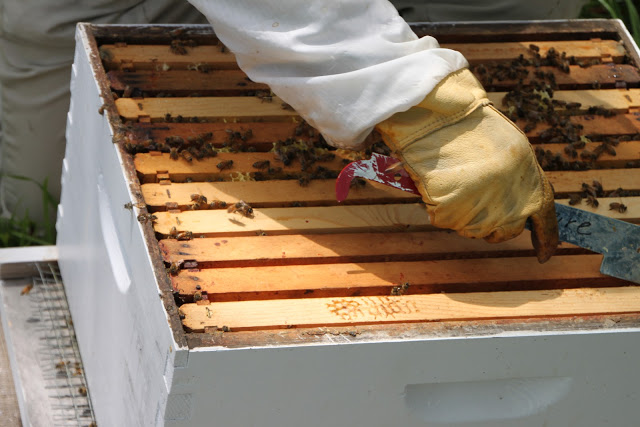 First an outer frame was pulled as we made our way to each frame in the hive.  As expected there was not much activity yet.  The bees were still building out from the hive center. 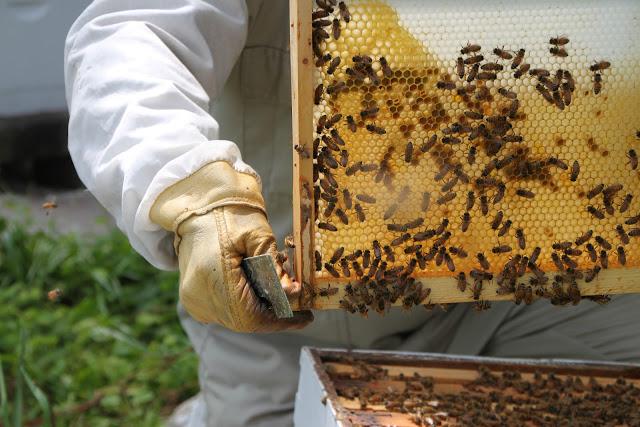 When we pulled out a frame from the middle of the deep.  It was covered in bees, honey, pollen and brood. 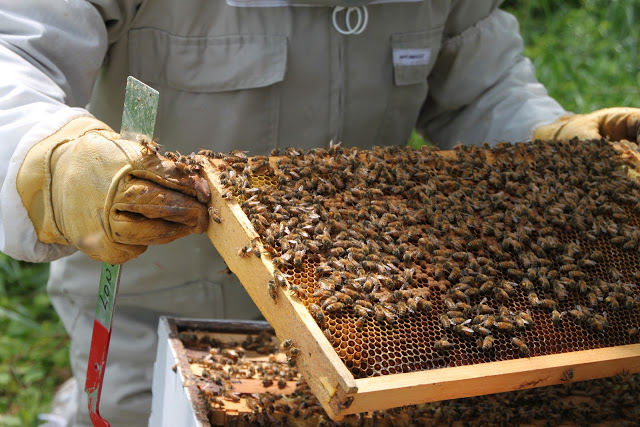 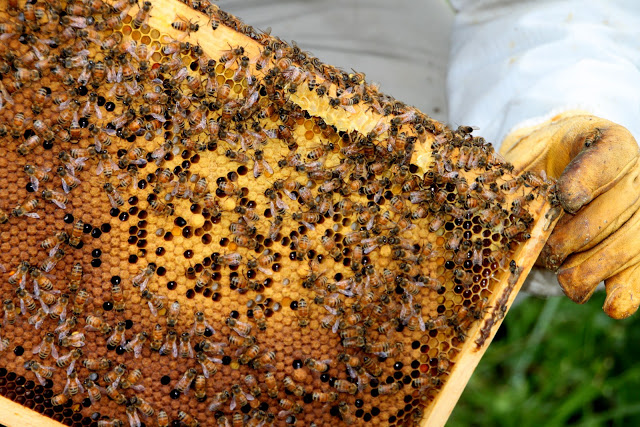 The queen was spotted walking around.  Do you see her?  She is the larger bee on the frame pictured below.  If you think of a the frame as the face of a clock, she would be around 4 o’clock. Look at her abdomen it is almost solid yellow with very little black. 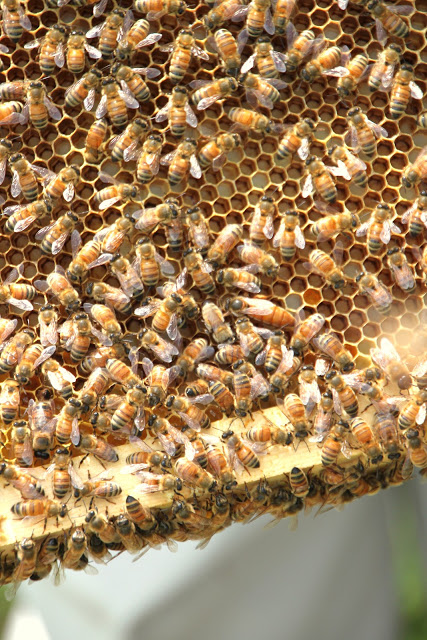 Soon enough, it was time to leave.  We refilled the sugar feeder and dusted the top deep with about 1 cup of confectioner’s sugar to help control for Varroa mites (We found 1 one the IPM board.)  We also set traps for small hive beetles with canola oil.  We reassembled the hives and in no time, the bees went back to business as usual, returning to the hive, loaded down with pollen. 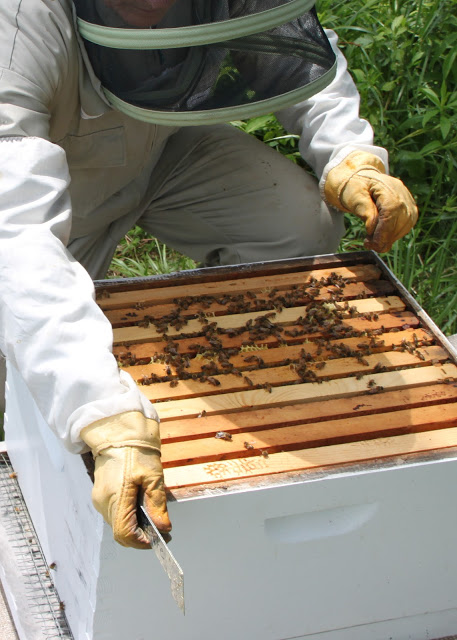 This past Tuesday evening, I was sitting in our monthly association’s class listening to a lecture on creating a a garden in our yard where honeybees would thrive.  On the top of the handout, there was a web site address.  As the words were all placed together, at quick glance I read the site as Theme Lissa Garden.  It wasn’t until the lecturer mentioned the site in her talk that I had realized I had misread it.  The site is actually The Melissa Garden.  Melissa means honeybee.  Almost 40 years ago, I was named after a honeybee.
This post is linked up to Homestead Revival’s Barn Hop.
Photo Credit:  Tilly’s Nest
Share on facebook
Share on twitter
Share on pinterest
Share on email 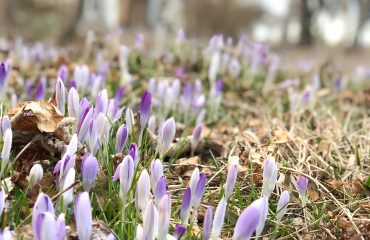