How To Fix a Broken Beak

Sunshine has always had a longer more glamorous beak. Even though Sunshine and Oyster Cracker were born on the same day, their beaks could not be more different. I like to think of beaks as noses. There are short ones, blunt ones, fat and wide ones.  Some are pointy, narrow or rounder. Some hook off the the side and others down toward the ground.  Some even have what appears to be a beak “overbite”.  Oyster Cracker has a short perfect little beak, not too wide yet perfectly straight and blunt. Sunshine on the other hand has a more glamorous beak. Her beak is narrow and long with a tiny downward hook at the end. 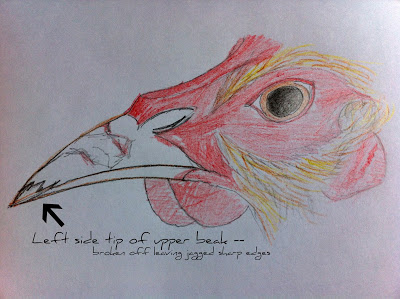 Beaks grow like fingernails. Through preening and wiping their beaks, chickens control the shape and length. For over a year I wondered how Sunshine has been able to grow her beak as some ladies grow long elegant fingernails.  Down the middle of the beak runs the quick, just like dog’s toenails. Beaks can and will bleed if they are cut or scraped and the quick is injured. A few months back, Sunshine scraped her beak. It has since healed. You can read about it here.
Yesterday afternoon, when I went out to give the girls their treats, I noticed that Sunshine’s long and beautiful beak was cracked down the middle.  On the left side, from the tip up a 1/3 of an inch, it was broken off and jagged rough edges were left ready to snag on something else. How, when and where this happened, I did not know.  I can only imagine that she must have stuck her beak somewhere where it did not belong, it got caught, she twisted and it broke off.  This broken beak required my immediate attention. 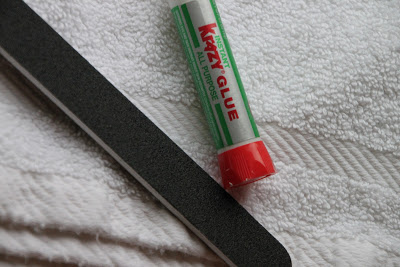 I went into the house and grabbed an emery board, Krazy Glue and an old towel.  I headed out to the coop.
Sunshine was easy to catch. As she came over to say hello, I scooped her up and wrapped her in the towel. Being sure to cover her wings and neck, I swaddled her snugly within the towel.  This makes chickens feel safe. In my best chicken voice I whispered, “doh, doh, doh.”  After a few second I felt her relax.
I held her head in my left hand. She wriggled. It took me a few tries to finally get a firm grip on her beak. Eventually, she stopped twisting and I went quickly to work.  With the emery board, I slowly and methodically filed away the rough jagged edges. These were my firsts concern. I blended them as best I could and softened their sharpness.  Next, I repaired the front of the beak into a softer point following the natural line of her beak.  I wiped it clean. Lastly, where the beak had split in the middle, I placed a thin layer of Krazy glue. This was the hardest part.  I had to hold her still until it dried.  To do so, I sat with her still wrapped in the towel and gave her some nice love.  As I petted her, I told her she was a good girl, reassuring her that I was trying to make her boo boo better.  It dried and I returned her to the run.  She was off and running, back to show the other girls her repaired beak.  She was happy as a lark and probably none the wiser on how to prevent more injuries in the future.
Photo/Sketch Credits:  Tilly’s Nest

18 thoughts on “How To Fix a Broken Beak”