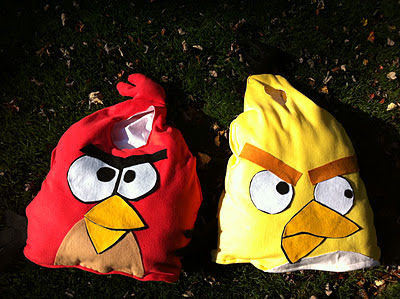 I have double pink eye.  So, I don’t get to spend too much time with the chickens.  I do not like handling them when any of us are ill.  We try to keep our interactions to a minimum on sick days.  I realize that it is rare that illnesses cross between humans and animals but we like to err on the cautious side. My daughter was off from school and we needed a project to keep us away from the chickens.

Late in September, my kids decided that they wanted to be Angry Birds for Halloween.  The evening that they told me, I hopped on-line and ordered the red bird costume for my four year old daughter and the yellow bird costume for my eight year old son.  They were scheduled to ship from Toys R Us on October third.  Well, October third came and went.  We waited.  Yesterday, I received an email that they cancelled the order.  The costumes were never coming.  After the kids went to sleep, I quickly popped on line and scoured the internet searching for two children’s Angry Bird costumes.  They were available, for over $80!  I then decided that maybe I could sew them myself.  My kids had their hearts set on these costumes.  With my talents, they would either end up being the talk of their classrooms in a good way or in a “My mom made this ridiculous costume and I’m wearing it because she made me”.
I learned to sew a drawstring handbag in the fourth grade at 4-H with Mrs. Freu’s guidance.  It took 6 agonizing months!  I never did sew much after that.  Now and then, I would sew a straightforward quilt, a baby blanket, a bag for the beach.  Today, I decided that I would take a trip to the fabric store with my daughter.  We would make those Angry Bird Costumes even without a pattern.
I guesstimated the amounts of fabric and grabbed felt squares for the faces off of the shelves based on the photo I had in my IPhone.  We came home and quickly got to work.  I laid my daughter on the fabric and sketched the basic shapes.  I pinned, I sewed, I cut for 3 hours.  My daughter helped me along the way.  Her favorite part was being my model and stuffing.
Finally, they were complete.  They didn’t turn out too badly if I do say so myself.  If I know my kids, they will put these on after my son gets home from school and go show the chickens.  They share everything with the chickens; report cards, new toys, stories from the day and now their Halloween costumes.  I wonder what the girls will think?

7 thoughts on “A Sewing Project”