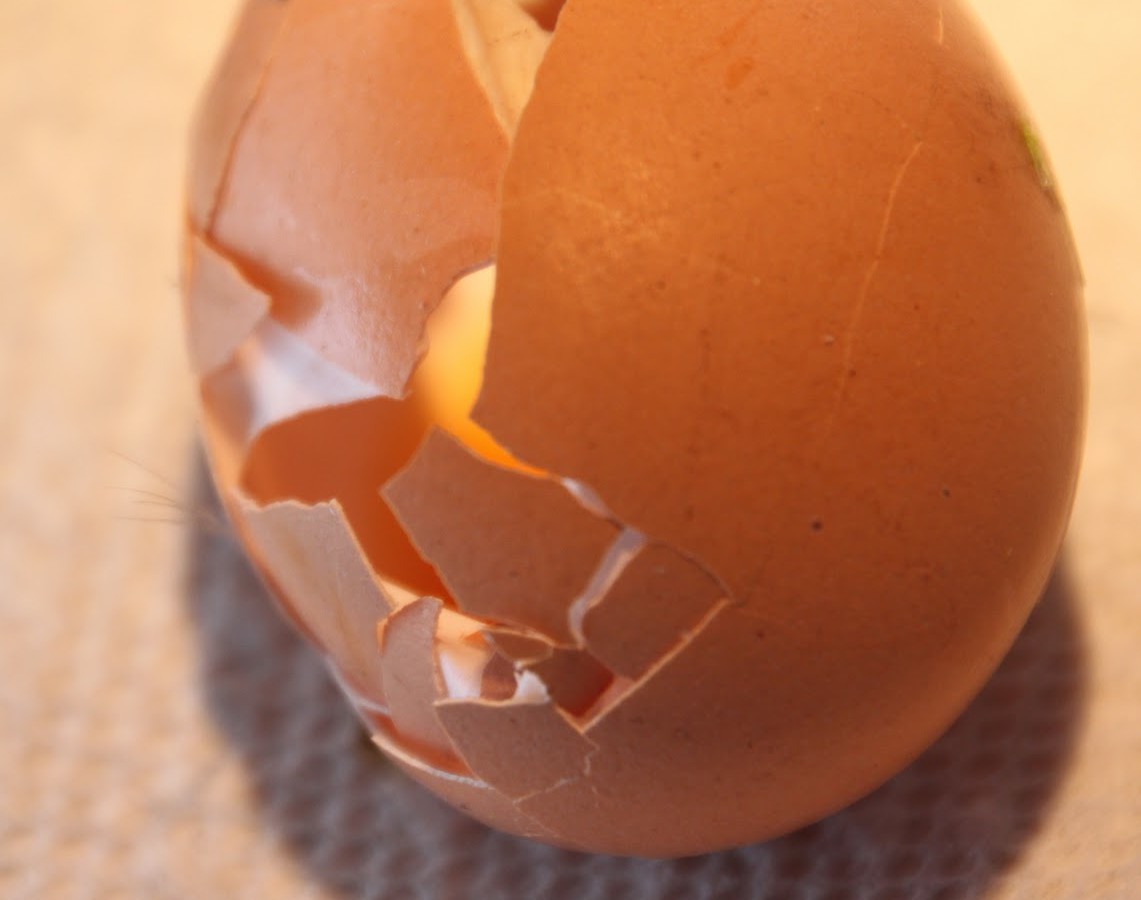 Yesterday, I went out to the coop.  I could not wait to say hello to the girls.  I missed them so.  It was funny.  At first, I do not think that they recognized me.  I opened up the coop door and tossed scratch onto the run floor.  No one seemed to care that I was home.  I was sad.  I figured we would get reacquinted when I cleaned the coop later. It was on my to do list.  I opened the nesting box door.  I did not find any chickens in the boxes. Yet, I discovered my worst nightmare.  Someone had pecked open an egg and ate the entire contents!

Strewn on the shavings in the nesting box were pieces of egg shell, gooey strands of yolk and remnants of sticky egg white underneath one of the roosts.  Sunshine, Oyster Cracker and Tilly came into the coop.  Like addicts, they began to peck at anything that seemed like it had raw egg on it.  They pecked at the shell.  They pecked at the egg-soaked shavings.  They pecked at the walls dotted with yolk.  They had glazed over looks in their eyes.  They could not get enough.

Horrified, I chased them out of the coop, scooped up the egg shell and decided that I needed to clean out the coop immediately; so much for those 6 loads of laundry that I had planned on washing.  As quickly as I could move, I cleaned out the entire coop, disinfected the walls, floor and roosts.  I also used an anti-icky spray to rid the coop of any egg smell.  Surely if it worked on pet urine, it should work on raw egg!  I refilled the coop with clean dry shavings and added nesting box blend to the boxes.  Then, the test-I let the girls back inside.

Tilly, Oyster Cracker and Sunshine entered at once.  Still recalling the egg, they searched frantically for signs of that ill fated egg.  After a few minutes, they left disappointed.  I determined that this behavior needed to be nipped in the bud.  For me, it was this chicken owner’s worst nightmare come true.  I was going to have to check on the girls every half hour or so for eggs.  I needed to break this habit.   Thank goodness, that huge laundry pile had me on house arrest.

A half-hour later, I went outside and found Dolly in one of the nesting boxes, still broody.  This time though, she had a friend.  It appears while we were away, Autumn has decided to join Dolly’s broody club.  Just like Dolly, she has removed all feathers from her chest.  For once, I thought that this was great timing.  These two broody girls would be protective of any eggs laid.  I should be able to use them to my advantage.

A couple of hours later, Tilly was in the nesting box on the left.  I waited.  The entire egg laying process takes about 15 minutes.  Soon, I peeked in and saw Tilly standing.  I opened the nesting box.  Outside Tilly’s box were Sunshine and Oyster Cracker.  Tilly’s egg was all the rage.  Everyone was interested.  Risking life and limb from a vicious peck, I grabbed the still wet with bloom freshly laid egg.  Phew, I at least saved that one.  And so the day went.  I ended up with a total of 3 more eggs and not one was damaged.

This morning when I woke, I was anxious as anything to get out there early and rescue any eggs from the girls.  There were no early eggs.  I saw that as a good sign.  Today, the chickens were not interested in the eggs.  I kept them distracted with the chicken toy, the treat ball and lots of TLC.  They laid 4 eggs again and none were disturbed.  Overnight, in one fowl swoop, they seemed to have forgotten about pecking the eggs and suddenly remembered how much they loved and missed me.  Today, after my week-long vacation their little brains remembered their chicken mama.