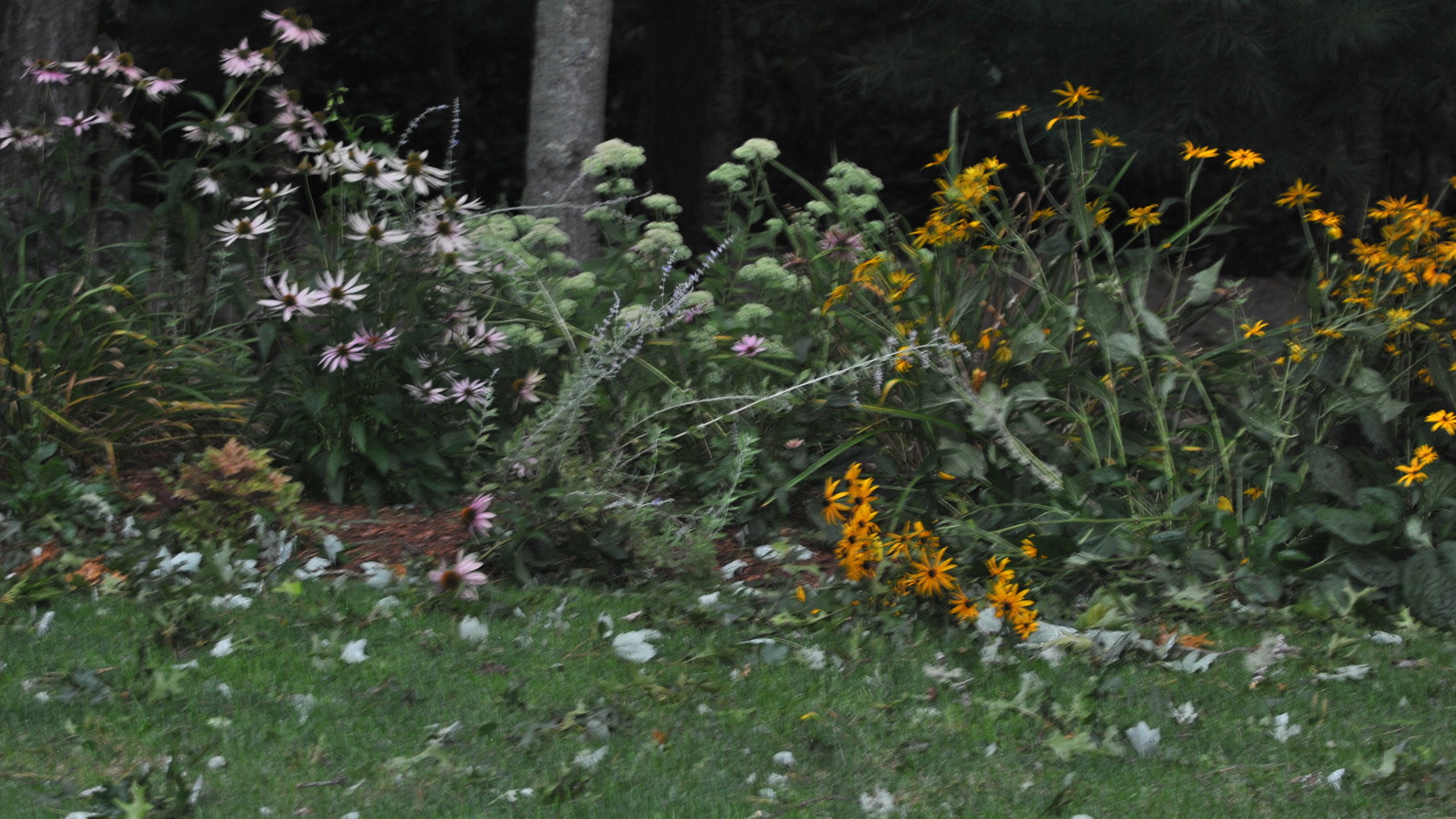 “”What Hurricane?” asked the chickens

Irene packed quite a punch for Cape Cod.  Bracing for the worst, we truly had battened down the hatches in the days prior to her arrival.  As Irene’s projected course veered West, we were spared the worst.  However, we did have wind and lots of it!  We woke to the winds and by late morning we were experiencing 40 mph gusts and no power.  The power was out for most of the day.  However, that did not stop the chickens from being, chickens. As I went outside, I could see the tree tops tossing in the wind.  Swaying dramatically, they would dance from side to side.  The dance was intense, often jarring.

The night before the hurricane, I had covered the run with the plastic that I use in the winter.  It was still intact from the night before and had barely budged an inch.   There was also no rain, just wind.  A few weathermen were equating Irene’s behavior to a familiar Nor’easter.  I went out early to check on the girls.  It was around 7am and there were already 2 eggs in the nesting boxes.  So far, the storm had no effects on their typical day.  Around 10am, I made a decision.   The winds, although scary at times, were predicted to decrease as the day progressed.  I took a chance and I let the girls out into the run.  They were incredibly happy.  They looked at me as if to say, “Ma, what took you so long to let us out?”  Apparently, they were not fazed.

Quickly, I returned inside.  I kept a close eye on the plastic tarp and the chickens from the window.  They were as happy as little chickens can be.  They were scratching around, finding treats, protected from most of the wind and acting as if Irene was not even in the neighborhood.  I was shocked.  For us powerless humans, the day dragged.  We read books, played board games, relaxed, took naps and even ordered pizza for dinner.

I went outside around 4 pm again, and the winds seemed to have subsided.  I brought the girls a bunch of arugula.  They were so glad to see me.  I think they had missed my presence.  Little did they know, the dangers of Irene!  At around 6pm, the power was finally restored.  The chickens went to bed early, as the sky was still darkened from the thick gray clouds.  As I was saying goodnight, I noticed that Tilly was still outside.  Unusual for her, she was making sure that her entire flock made it safely into the coop. Finally satisfied, she retired as well and I locked them in for the windy night ahead.

I awoke this morning, to no internet and a yard that was a complete mess.  Sticks, branches, leaves and the like were scattered everywhere.  The flower beds were blown flat and blooms cracked off.  I did not care.  Everyone in the family was safe including the chickens.  Today,  I spent 4 hours in the yard with the kids trying to put it back together again.  The chickens were so happy to see us all outside.  I finally went over and brought the girls some snacks this afternoon.  As they flitted across the run, filling their crops as fast as they could, I checked in the nesting boxes.  There were 5 sweet gifts; eggs from the girls.  I could not help but smile myself.  For all my worrying, it was nice to know that the girls were laying eggs and thought of yesterday as another windy day on Cape Cod.

This post is linked up to Homestead Revival’s Homestead Barn Hop.

3 thoughts on ““”What Hurricane?” asked the chickens”