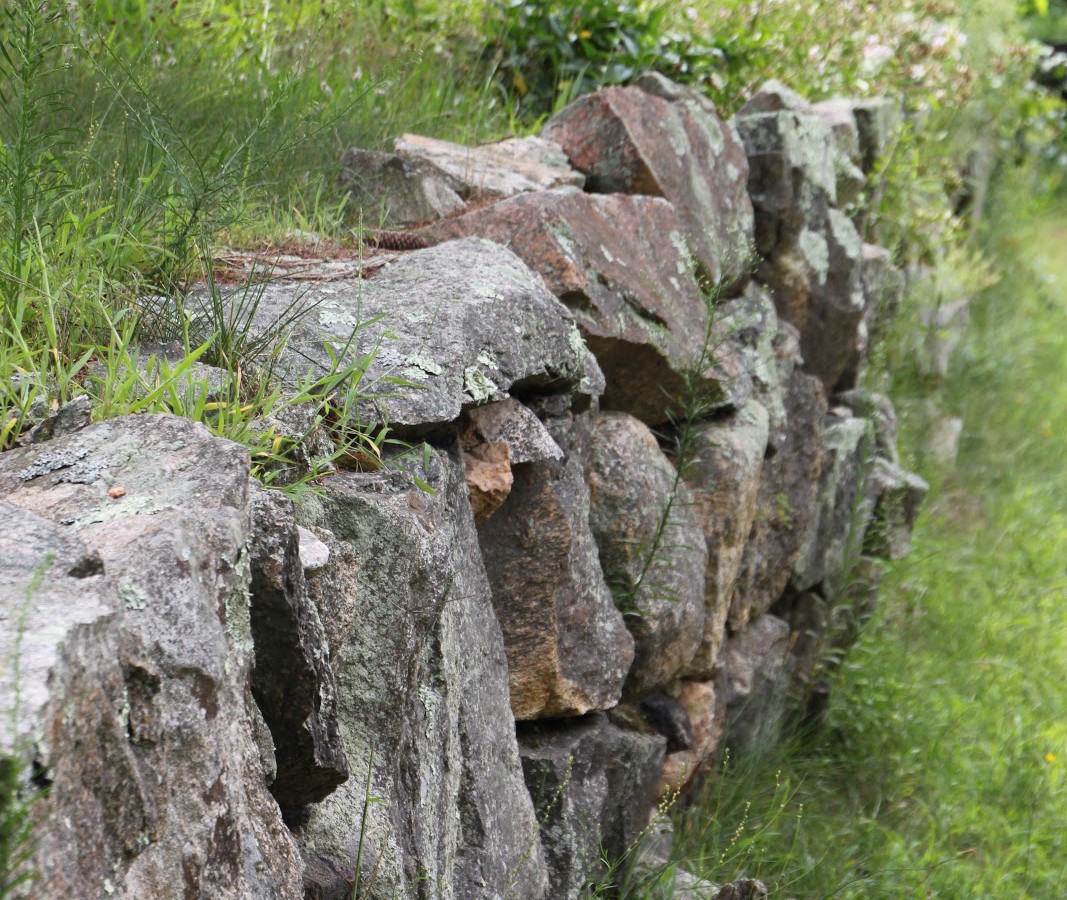 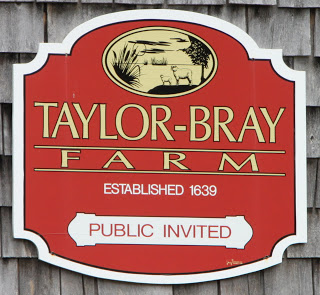 Cape Cod is rich with history.  Our country was founded here in Massachusetts. In fact, did you know that prior to landing at Plymouth Rock, the settlers on the Mayflower first landed on Cape Cod?  They were chased away by local Indians who inhabited that area.  Now First Encounter Beach can be visited in its natural beauty. Today, we visited another piece of working history, Taylor Bray Farm in Yarmouthport, Massachusetts.

In 1639, the farm was founded by Richard “of the rock” Taylor while the land was still part of Plymouth colony. It remained in the Taylor family for many years until 1896, when the Bray brothers, who both worked on the farm for the Taylors, purchased the property.  In 1987 the farm was purchased by the town.  It is now run by the collaborative efforts of several preservation groups.  Today, the smaller 22 acre property is a working farm.  It has donkeys, goats, cattle, sheep and chickens. 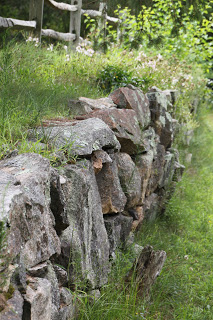 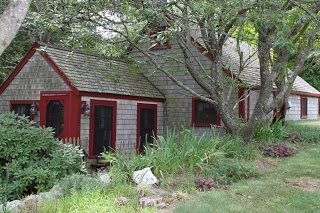 As we arrived, we were lucky to discover that the morning chores were still being performed.  The staff was cleaning the chicken coop and we were able to find out more about the flock and its history.  The coop was updated in 2006.  It is a very simple design. 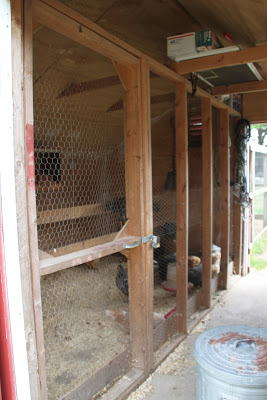 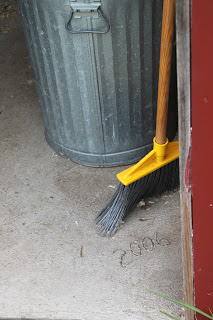 The coop is divided into two halves.  The Southern portion acts as the “coop”, complete with food, roosts and nesting boxes.  The Northern half features a breezeway housing extra feed and supplies while allowing movement through the building.  This breezeway is closed off in the evenings with doors on both sides. 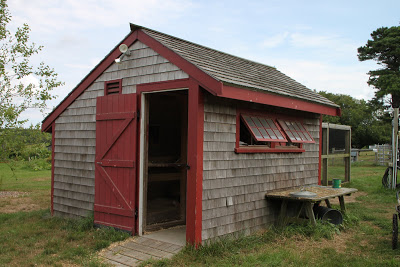 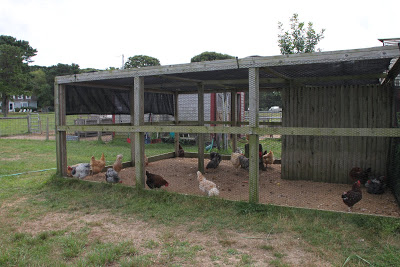 The flock consists of Polish Hens, Dominos, Buff Orpingtons, Wyandottes and Light Brahmas.  The flock is older.  The farm never culls it hens; rather, they are allowed to live out their natural lives.  One of the Light Brahmas is even blind.  She has no eyes.  Upon questioning, no one knew what had happened to her.   They could only tell me that she was thriving and had been like that for years.  I found her against the side of the run, gently walking around in the sandy floor.  I felt sad for her.  She, on the other hand, appeared happy and unfazed. 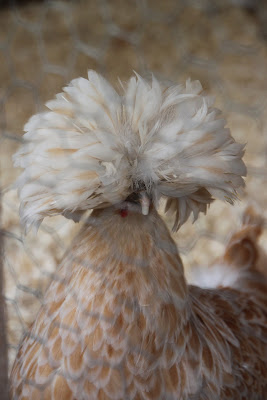 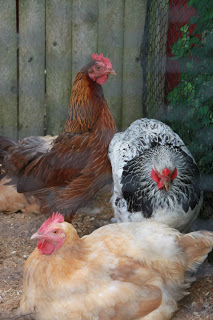 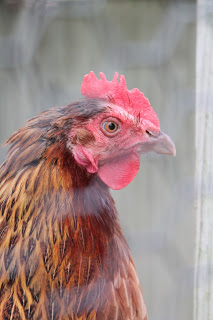 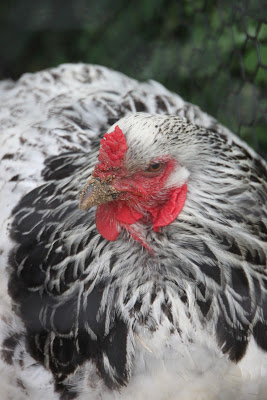 The farm’s rooster showed up one day out of nowhere. He was taken in off the street.  Apparently, one of the farm’s neighbors spotted it and lured it across the street with bread crumbs.  Once the rooster took one look at the girls, it was love at first sight. He was not willing to leave his new found loves.   He has been a permanent fixture ever since. 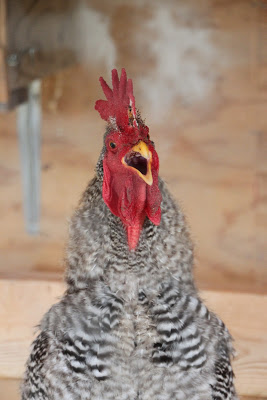 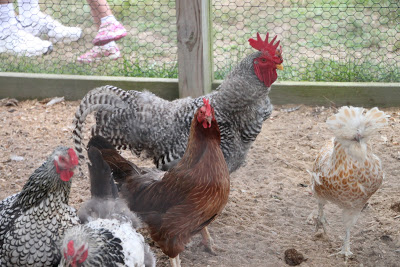 The girls typically lay 2 to 8 eggs per day.  With about 20 hens, many of them are at least over 5 years of age.  Last Spring they had an issue with mites, thus many of the girls are missing feathers.  These should grow back after they molt this Fall.

As we continued talking about the Bray Farm flock, the gentleman asked me if I had nice chickens.  I replied yes.  “You must consider them pets then”, he replied.  “These chickens here are not pets.”  If you ask me, I would beg to differ regarding his opinion about this flock.  I believe that even though they are part of a working farm, they are receiving a wonderful gift from the farm.  They are not depended upon for meat or eggs.  They are allowed to live without providing anything in return.  This made me happy.

It was nice to meet the flock on this overcast misty day.   The best thing about chickens is that the weather doesn’t dampen their spirits.  I also learned again about perseverance.  The little blind girl certainly didn’t let her blindness stop her from living a wonderful life on the farm.

To see all of the Tour de Coops featured on Tilly’s Nest click here.

This post is linked up to Homestead Revival’s Homestead Barn Hop.