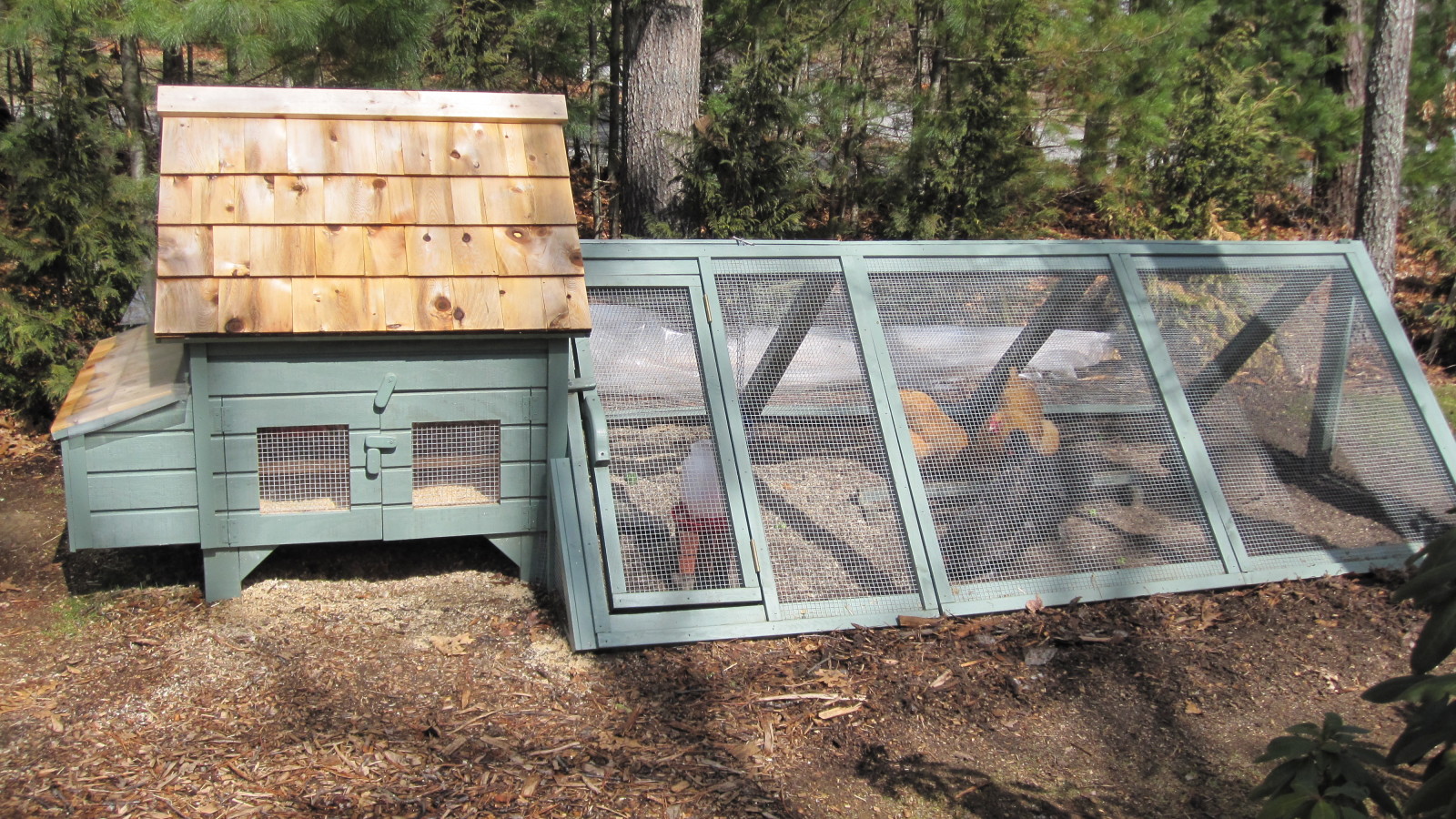 Today after yesterday’s snow, I could not wait to get out and do a little cleaning.  I originally planned to just clean the interior of the coop. However, as I began, I decided to clean the whole entire thing!  I let the original flock out to free-range.  I locked Meesha and Autumn in the run and started with the coop.  It is usually a rather quick job taking about 15 minutes.  However, today was different, I had to contend with Chocolate.

In his rooster efforts to keep his girls safe, he could not stop coming over by me.  It used to be friendly, now, I think he is determined to claim me as one of his girls.  I do have to admit, he makes me a little nervous.  I would dread to think of him hopping on my back with his claws out!  Everytime, I scraped out the dirty shavings from the coop with the dustpan, he would come running.  Almost, like an attack dog.  I would have to stop and go pick him up.

I tried with all my might to get him to know that he was okay.  I was not going to harm him or his girls.  I know that he just couldn’t help it.  Despite all my holding, snuggling, and love, which he reciprocated,  he was still on high alert.  Finally, I had to scoop him up and put him in the run with Meesha and Autumn.  Within a matter of minutes, I finished cleaning the inside of the coop and then opened the door from the coop to the run.  Meesha and Autumn were thrilled to run inside.  They are both still broody and were in a hurry to get back to their nesting boxes and sit on their invisible eggs! Chocolate followed the girls in the coop and then I locked all three of them in the coop.

On all fours, I climbed into the run.  I regraded the run and removed some large roots that the chickens had unearthed in their digging frenzies.  I filled in their sunbathing dust bowls and raked the area clean.  I also removed the plastic tarp that had been draped over the run.  It acted to keep the snow out and did a beautiful job. However, it was covered in chicken dirt and dust.  As a matter of fact, so was all of the wood and hardware on the run. I got out the hose.

I just could not stand it any longer.  I scrubbed and rinsed off the entire run and the exterior of the coop.  The entire process from beginning, cleaning the coop and scrubbing the run, took about an hour.  The girls loved free ranging during that time.  They made a happy chicken mess.  Leaves were strewn about and dirt was flying.  Once the coop and run were clean.  I returned the girls from free ranging and opened the coop door so that Chocolate could reunite with his girls.  Meesha and Autumn were content to stay in their nesting boxes.    In the yard, I went around to all of the areas where the chickens left their mark.  It is never difficult to tell where a chicken has been.    As I raked everything back into it’s place, I could not help but smile.  Chickens would never make good spies.  There is nothing stealthlike about them!