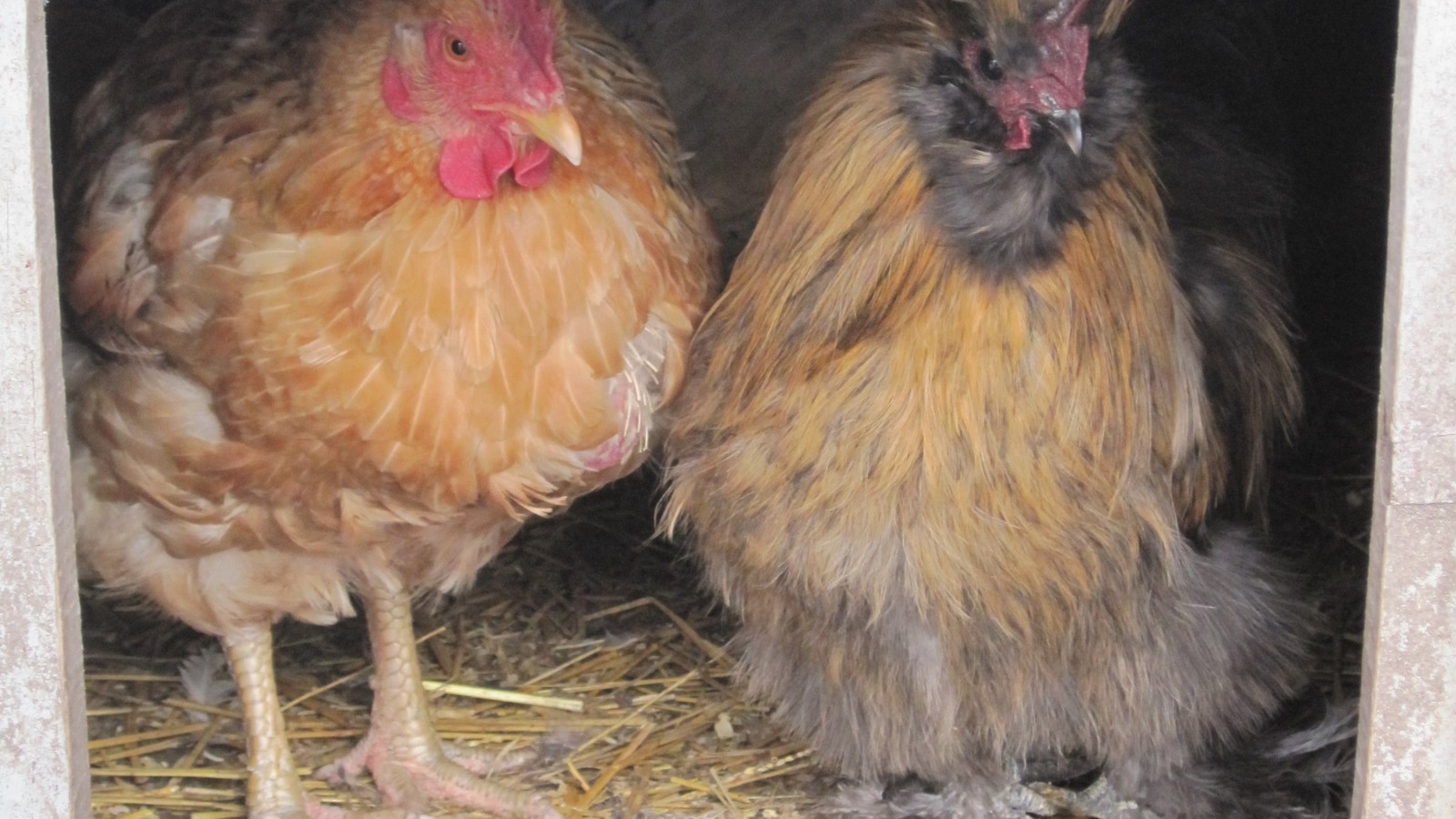 At first glance, you would never know that Viola and her family have chickens.  Tucked away behind some rather large rhododendrons is a large shed/coop and the chicken run.

Viola has been raising chickens for seven years.  Her first three chickens, 2 hens and a rooster, arrived to her when she lived in New Hampshire as a housewarming gift from a friend.  From there, her flock grew to about eight hens.  Her flock moved with her to Cape Cod four years ago.  They have now settled in Barnstable.

Viola’s current flock consists of a Hamburg, Silkie Bantams, a Buff Brahma/Araucana mix, an Araucana, a New Hampshire Red, a Barred Rock Plymouth, a Columbian Wyandotte and a Label Rouge.  She currently has 10 hens and three roosters.

A self-professed animal lover, Viola and her family always seem to adopt chickens that would have met unfortunate events if not for their interventions.  Over time she has integrated many new additions into her current flock.  Her son even saved a broiler hen that should have ended up on a dinner plate long ago.

Viola’s current coop was created from using half of a storage shed.  The coop itself is 8’x3′.  The run is about 12’x 20′.  Viola uses the other side of the storage shed for lawn and garden storage, chicken supplies, her infirmary and brooder.  Due to various ages of her flock, in the winter she currently gets about a dozen eggs a week.  She keeps roosters in her flock for a few purposes.  The roosters can provide her with chicks in the future.  She also keeps them to educate her children about the biology of keeping chickens.  However, most importantly, she just really likes roosters.

Her flock’s favorite foods include oats, oatmeal, cream of wheat, tomatoes, lettuce, melon and cucumbers.  She shared two of her top chicken tips with me.  She suggests feeding items that you typically would compost to the chickens, bearing in mind the chicken’s dietary restrictions.  She also suggests using flat inner tubes of bike tires as anti-slipping devices.  Pieces of cut tire easily slip onto hooks used to hang feeders and waterers and prevent them from tilting askew.

Viola has had only had one encounter with predators.  She recalls that it happened when she lived in New Hampshire many years ago.  A sneaky skunk pulled some young chicks through chicken wire.  She also recollects having a rooster die from heat stroke.

It’s been a long time since she put those original eight chickens on a moving truck to Cape Cod.  As she speaks, her love for all things animal and chickens is evident.  I am so glad that she let me interview her for my first post on my Cape Cod Tour de Coop.

If you live on Cape Cod and would like to have your coop featured on my Tour de Coop series, please send me an email.