I knew that it would happen eventually.  I’m not actually saying that this happened for the first time yesterday.  I just happened to see it.  Both kids were home sick with that horrible cough that sounds like a barking seal.  The little one also had pink eye.  Needless to say, instead of braving the crowds and getting a little more shopping done, I was on home arrest, noticing every little dirty thing, clutter, and feeling like I was waiting on two little members of royalty during their recuperation.

If I do say so myself, we have a really nice set-up for feeding the wild birds in the winter.  Our set-up allows the birds to have a smorgasbord of sunflower seeds, nyger seeds and suet all at the same time.  However, the best part of the arrangement is that it is completely squirrel proof!  This is entirely another whole blog entry as it took us two years to perfect.

So yesterday, as I was emptying out the dishwasher, I caught a large bird sitting on top of the feeder’s arched pole.  At first, I though maybe it was a blue jay.  No, it seemed a little bigger.  Maybe it was a large woodpecker that we typically get; like a flicker or a hairy woodpecker.  No, it was bigger than that.  As I walked over, it dawned on me; it was a hawk.

My husband happens to be a birder, so I have become pretty familiar with the local birds that visit our yard.  I knew that it was either a red tail hawk or a Cooper’s hawk.  Upon closer inspection, based on the size, tail pattern and breast coloration, it was definitely a Cooper’s hawk!

I was shocked that it was just sitting there.  Of course, the feeders were all empty except for the rotund happy squirrel on the ground gathering the discards in his cheeks.  I was surprised that the hawk did not go for the squirrel.  I was even more surprised that the squirrel seemed to know that the hawk didn’t want him.  You see, Cooper’s hawks love chicken.  In fact, early colonial settlers called them chicken hawks.  Apparently, the squirrel and the hawk knew something tastier was in the yard.

The hawk flew from the top of the feeder pole to a rustic chair that I have on the front lawn.  It sat and glared over at the chicken coop.  It was only 14 degrees yesterday due to the Alberta clipper we were experiencing and I am sure that he was hungry.  I’m not sure if the flock saw him.  They were not free ranging yesterday, as it was even a little chilly for them.  They spent most of the day in their coop coming out in the run for water, scratching a little then returning inside.  He sat perched on top of the chair for about five minutes and just as I thought to grab the camera, turn it on and line up the shot, he flew away.

I had seen hawks circling over the yard.  I had seen hawks fly over the yard.  I now know that they know about the chickens.  I am sure that they will be back knowing a chicken buffet exists in our yard.  In fact, I thought that I would have seen one in the yard sooner.  This was my close encounter with a chicken predator.  I’m sorry Mr. Hawk, for now, something else will have to be on your menu. 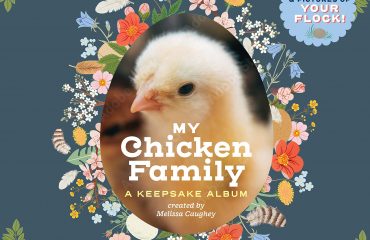