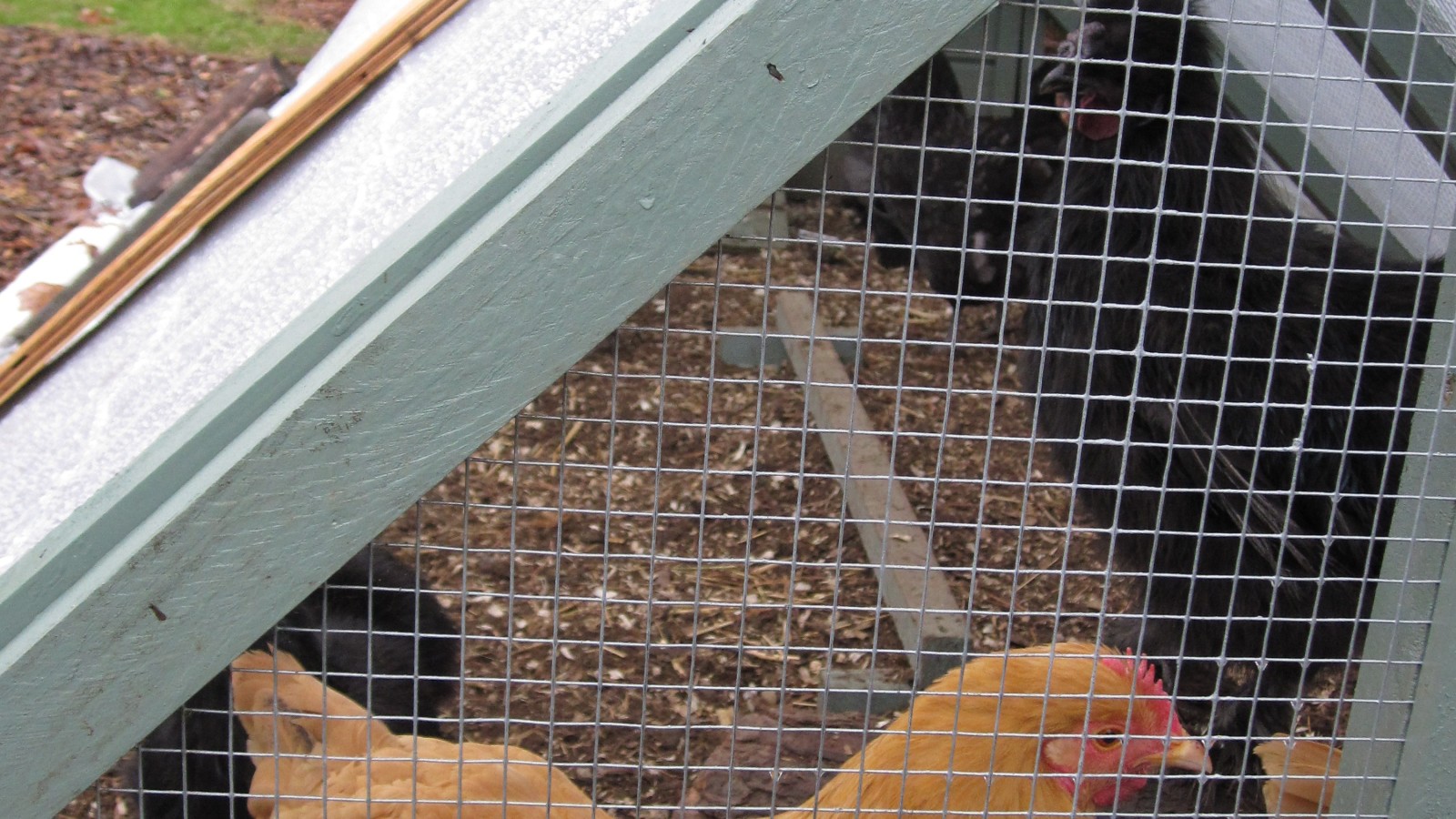 Bring it On, We are Weatherproof!

One of the cardinal rules in raising backyard chickens is to maintain a dry weathertight coop with excellent ventilation.  For the past 2 months, I have been trying to fix a leak in the nesting boxes.  I had troubleshooted like crazy, trying to figure out where the water was getting in.  Obviously there was a flaw in the design and I was determined to remedy the situation.  The leak did not cause puddles in the boxes.  It just caused the walls to get wet. I could not accept wet walls, as they can lead to mold and sick chickens.  Since we live in the Northeast, I also wanted to create a cover for the run that would serve a few purposes.  The cover would allow the chickens to go out in nasty weather.  It should keep the run dry and protect it from snow.  In addition, I wanted the cover to be removable and easy to store.  Thus, I made a trip to Home Depot with my ideas firmly planted in my head.

The first stop was the paint department.  There, I picked up a plastic 6 mil. opaque painter’s tarp.  I felt that the thickness of the tarp would lend to its durability.  The roll I selected would also allow me to create two covers just in case something happened to the first one.  In the lumber section, I picked up three 1″x2″x8′ boards.  I also selected some Gorilla Tape as well.  Next, I went over to the flooring department.  On a large roll, I found some type of clear plastic floor covering.  It was thick and flexible; this would definitely do the trick.  Fifty dollars later, I was on my way home to bring my ideas to reality.

First with the help of my neighbor, his power tools and a few stainless steel screws, we addressed the leak in the nesting boxes.  We cut a small piece of plastic to size.  It was approximately 5″x40″.  We bent the plastic up under the transom window, predrilled some holes and adhered it with four screws.  Next we bent the plastic around the edges of the nesting boxes and stapled it into place.  Finally, I cut another piece of plastic about 10″x39″ and slid that underneath the plastic we had just adhered to the nesting boxes.  I did not staple it in place, as I did not want it to be a permanent fixture.  In times of pleasant weather, I wanted the remove the second piece of plastic, allowing the roof to breathe.
Next I moved onto the run.  I cut the plastic painter’s tarp to fit the run.  Next I stapled the boards along the top of the plastic and along the bottom sides.  After stapling the sides, I Gorilla taped the plastic around the boards.  The finished cover is about 8 feet in length when rolled and can easily fit into a corner of my garage when not in use.  This tarp is going to be great when we expect snow and even rain for longer periods of time.  My chickens will be especially happy now that they have the option to go in the run and be protected from the elements.
Last night, when I went to lock in the flock, I added some landscaping rocks, logs and anything else I could find around the yard to help anchor the plastic tarp in place.  I also placed a brick on top of the nesting box covers just in case the one that was not attached was taken by the wind.  Last night it poured.  We also had gusts of 60 miles per hour.  Cape Cod is a very windy place!  I did not sleep well.  The rain was coming down in buckets and the wind was howling.  I knew that this storm was going to be the true test of my MacGyvering skills.
This morning when I went to check on everyone, the entire coop was dry including the nesting boxes!  The run was also dry and the tarp did not blow off.  This morning, I felt like I won.  I was proud of my accomplishments in weatherproofing.  I did not win a marathon and I did not win an Emmy.  However, I am a hero in the eyes of the chickens and my children and that my friends, is one of the best feelings in the world.

13 thoughts on “Bring it On, We are Weatherproof!”