And then there were 5 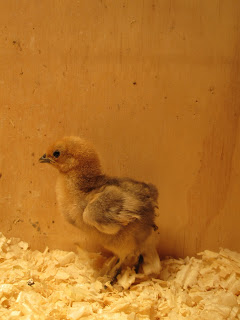 In the early days, our favorite little chicken was Peanut.  Peanut was always so curious; the first to come to us, discover the newest addition placed into his tiny 2’x2′ world.  Peanut always needed more care than the others in the beginning too.  Peanut was the one that I wasn’t sure would survive.  Peanut seemed the weakest of them all on that first day, droopy and wobbly.  Over time, our love for Peanut blosssomed.  The kids loved holding Peanut.  Peanut would snuggle into our chests and sit for time on end.  Sometimes, we would even hear a pleasure trill!

Peanut is a Buff Silkie Bantam.  At http://www.mypetchicken.com/ you can pay extra to have your chickens sexed.  Many people do not want rooster for the various reasons. Most people will pay extra just to ensure that they will get only females. However, silkies are very difficult to sex.  Most hatcheries don’t even attempt this.  However, http://www.mypetchicken.com/ does!  I paid extra for all females including the Silkie Bantams.

It wasn’t until about week 10 that I had my suspicions.  Peanut soon began to grow so fast.  Peanut’s waddle and comb were getting huge.  I read on the internet that you can be fooled by Silkies, that they often will look like one sex but turn out to be the other.  The other disturbing thing was that anytime I need to hold Peanut, I would be pecked.  At first the pecking was gentle, but as time went on it really could hurt depending on how you were gotten.

One day, early in the morning, my husband was leaving for work and I was in the garage getting their food and I heard it.  From inside the coop, a pathetic, “OOO, OOOO, DOO.”  Was I imagining things?  Then we heard it again.  I could not be sure who it was coming from.  Finally, after about a week I realized that it was Peanut.  Peanut was a rooster.

Over the next few weeks, Peanut turning out to be a rooster was becoming even more evident with each day that passed.  Again, I did research about keeping a rooster.  Currently, in our town, there are no regulations about keeping chickens or rooster.  Thank goodness for that.  I was just worried about his aggressive tendencies and our 2 little kids.  My husband and I decided that our rooster needed a new home.  I emailed many local farms on a whim and a farm off Cape about 40 minutes away agreed to take him.  There he will have about 100 hens to himself.  Oh, what a rooster’s dream!

It has now been about a week since we rehomed Peanut.  I do miss him so.  I miss his silly little antics, his trying to bully the hens, his curiosity, his gorgeous blue earlobes, and even his warm little body.  I do know that we made the right choice and he should be much happier it is just hard to say goodbye.  Just like a baby, he was mine since he was one day old.

2 thoughts on “And then there were 5”